The so called flappy valve is part of the ’87 S4 and newer model’s resonance induction system. The intake system has a resonant frequency, which is a function of the runner design, the volume of the plenum it is attached to, as well as others properties. See Helmholtz Resonance.

As the column of intake air rushes into the engine, it ultimately gets abruptly stopped by the closing of the intake valve. The momentum in the column of air, as the air slams against the closed valve, generates a pressure wave which translates backward towards the plenum volume, and then forward again into the runner(s). At the resonant frequency of the intake system, which occurs about a specific RPM range, the air flow (pressurized by this pressure wave, increasing its density) returns to the engine just in time for the intake valve to open. Thus, at the RPM range tuned by dimensional properties of the intake, the intake charge is of a higher density, which, in turn generates increased power.

Recalling that the intake resonance is a function of the plenum volume, when the resonance valve opens, the left side and right side plenums are joined, effectively doubling the plenum volume. This generates a second resonance (one with valve closed for one RPM range and one valve open for another RPM range). Thus, the increased air density (and increased power) can now be realized at 2 different PRM ranges, due to the 2 separate resonances. Shown below, one can see the two bumps in the torque curve due to the 2 individual resonances. 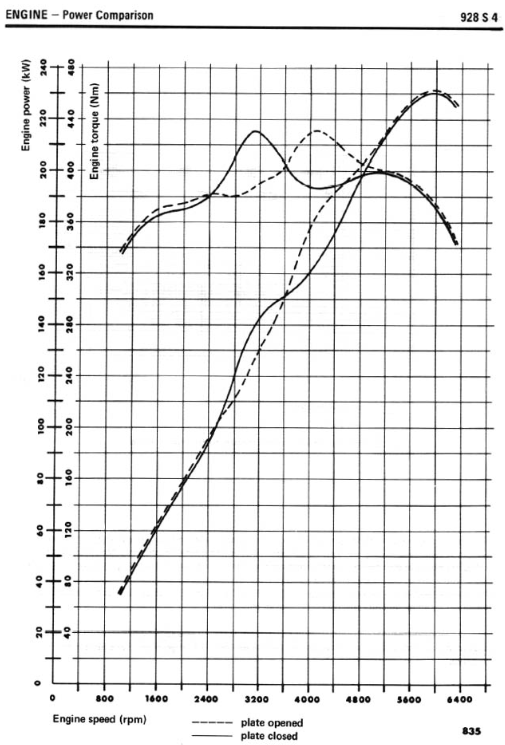 GREAT NEWS!! The 928 BuckeyeLandsharks showed up […]

Wow! Simply Wow! Too bad I don't own anything ni[…]

Apologies for the resurrection of this not total r[…]