Tires. Everything wrong but they're round.... (size issues)

They make... noises. First, they *fill* the wheel wells, to the point that when I come into the driveway and go over the little hump while turning I can hear the rear tire rub slightly against the wheel fender. More importantly, the front tires will just barely rub against the plastic brake ducts when making a tight turn in a parking lot. This is not due to wheel turning stops as trying to steer without making the noise leads to wide turns that are far greater than any other car I have ever owned. Not a big deal, I lifted the front back up to the low end of factory settings and I can probably drop 10 pounds of pressure on the tires to make them a bit smaller.

However my car is weird: The Previous Owner did a lot of odd stuff with it (insane lowering, etc) and one of the odd things is it has Continentals 225/50ZR16 tires front and back. Also the rear two rims are different from the front rims, they are a bit wider but have the same size tires as the front.

Difference between the rear tire rims and the normal 16 inch rear rims: 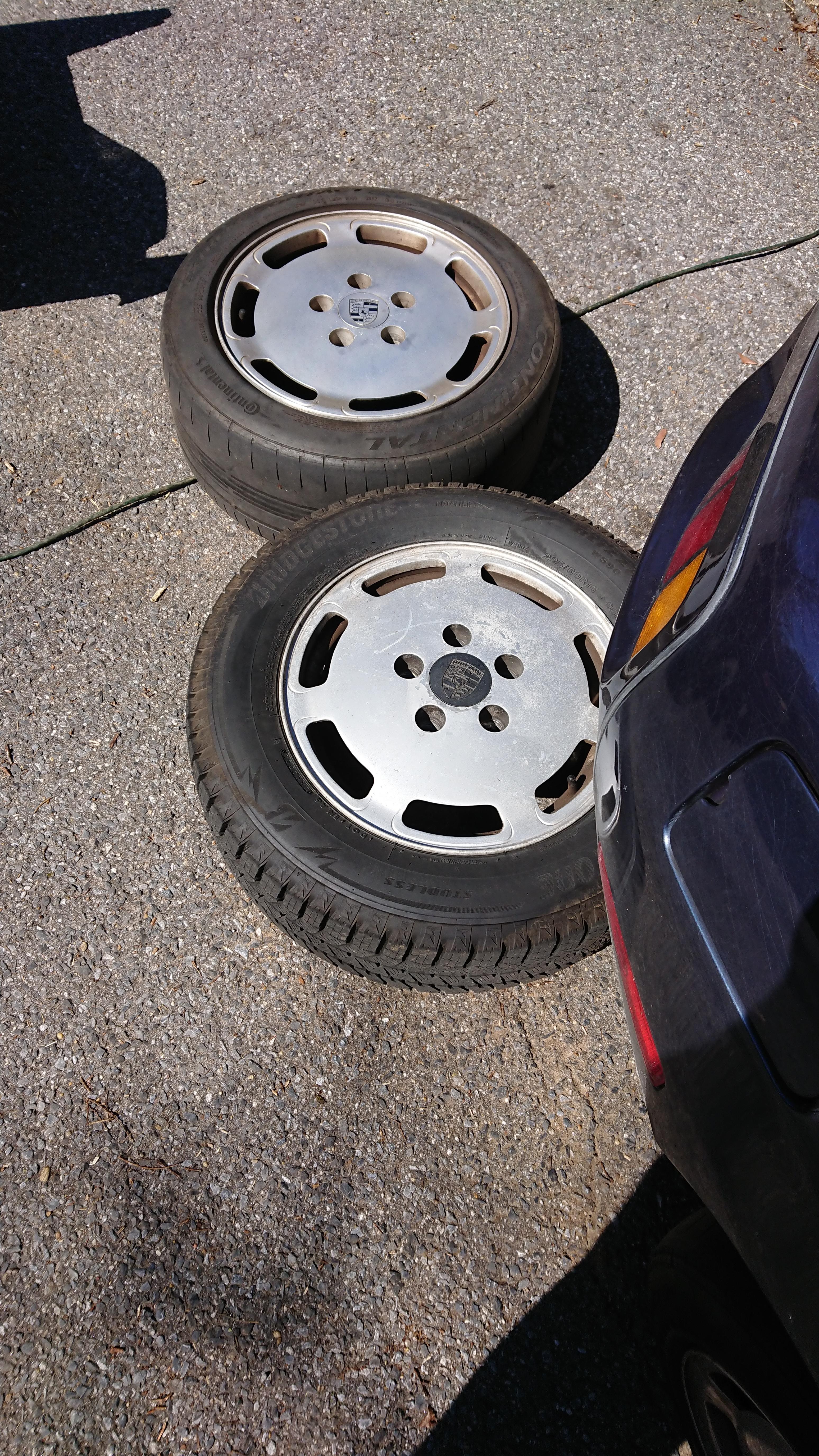 When I got the car I just put on new tires of the same size and enjoyed it. Now the "summer" tires are shot, and I need to replace them.

Question: What do I replace them with? Do I go with the 50's all around? 60's? Should I be using a wider tire on the rear if I have the wider rims? It's an 86.5 so it has the 87 and up suspension and that might include different brake ducts (maybe they did them different in 86.5 due to the difference in brake discs and the like, I don't know.) The rear wheels do have spacers behind the tires, and they look to be factory.

Note the tire size vs. rim size. You can verify your wheels specs and go from there. 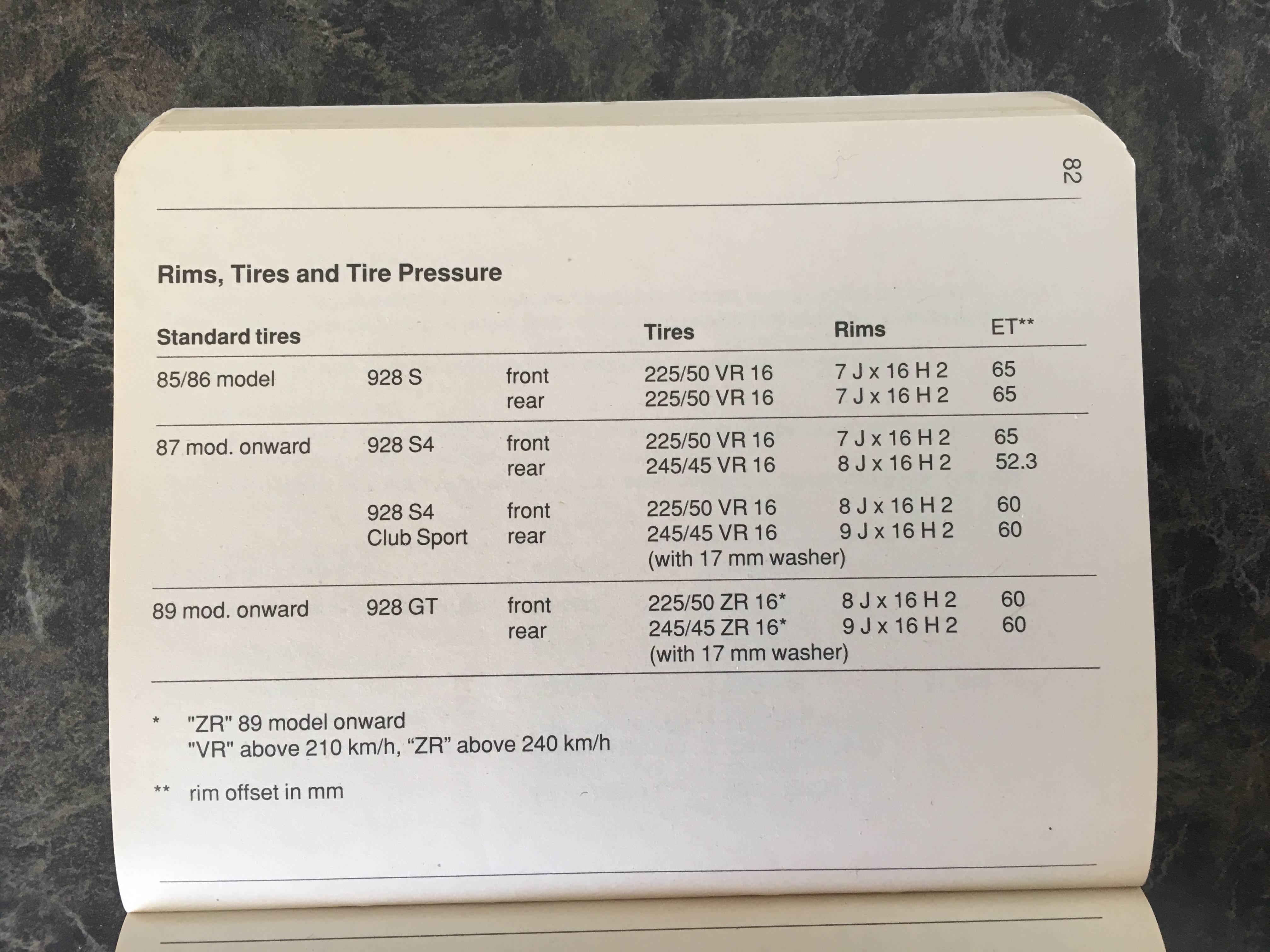 By Erik N  -  Sun Mar 21, 2021 3:36 pm
Quote
-  Sun Mar 21, 2021 3:36 pm #67888
One advantage to running all-identical-size tires is the ability to put them on any corner of the car. Also, all things being equal, I will take a non-directional tire over a directional one every time, so they can run either direction. (Plus, my car seems super sensitive to "V" shaped tread patters. Some will literally "buzz" while driving.) Also, once you get to know the car you will be able to feel if one corner loses air. The 928 platform is that good.

That does cut the price in half, any experience with the BF Goodrich tires? Mostly fast driving and Autocross here these days.
1986.5 928S Prussian Blue, daily driver
1997 944S Crimson, owned 30+ years now
2000 Honda Insight (the "Not Porsche")

Yes.
Hanlon’s Razor: Never attribute to malice that which is adequately explained by stupidity.
Heinlein’s Corollary: Never underestimate the power of human stupidity.
Worf’s Razor: Never attribute to stupidity that which is adequately explained by laziness.
Worf's Corollary: Once you've mitigated risk from stupidity and laziness in your endeavors, failure is usually the result of insufficient imagination.

On the positive side they look great, fit properly, and the car no longer rubs the tires. Once the suspension settles (100 miles of driving) I'll take it in to check the alignment and I should be set till the winter!

Let me look further into that steering wheel u[…]

Yes I know and I appreciate that fact more than an[…]

That's cool for sure.