By maddog2020  -  Mon Jul 05, 2021 4:33 pm
Quote
-  Mon Jul 05, 2021 4:33 pm #89668
Fiddled around with a lot of small stuff. I had pulled out the carpet, so I had to finish up the firewall, so I could get the throttle linkage set up with my new linkage. Also re covered a few of the harness clamps. Raychem DR25 is the heat shrink tubing I used for the fuel injection harness and it makes old clamps better than new. I redid the one that holds the FOE and it goes thru the timing belt cover as well as the big one for the battery/alternator cables going to the starter. 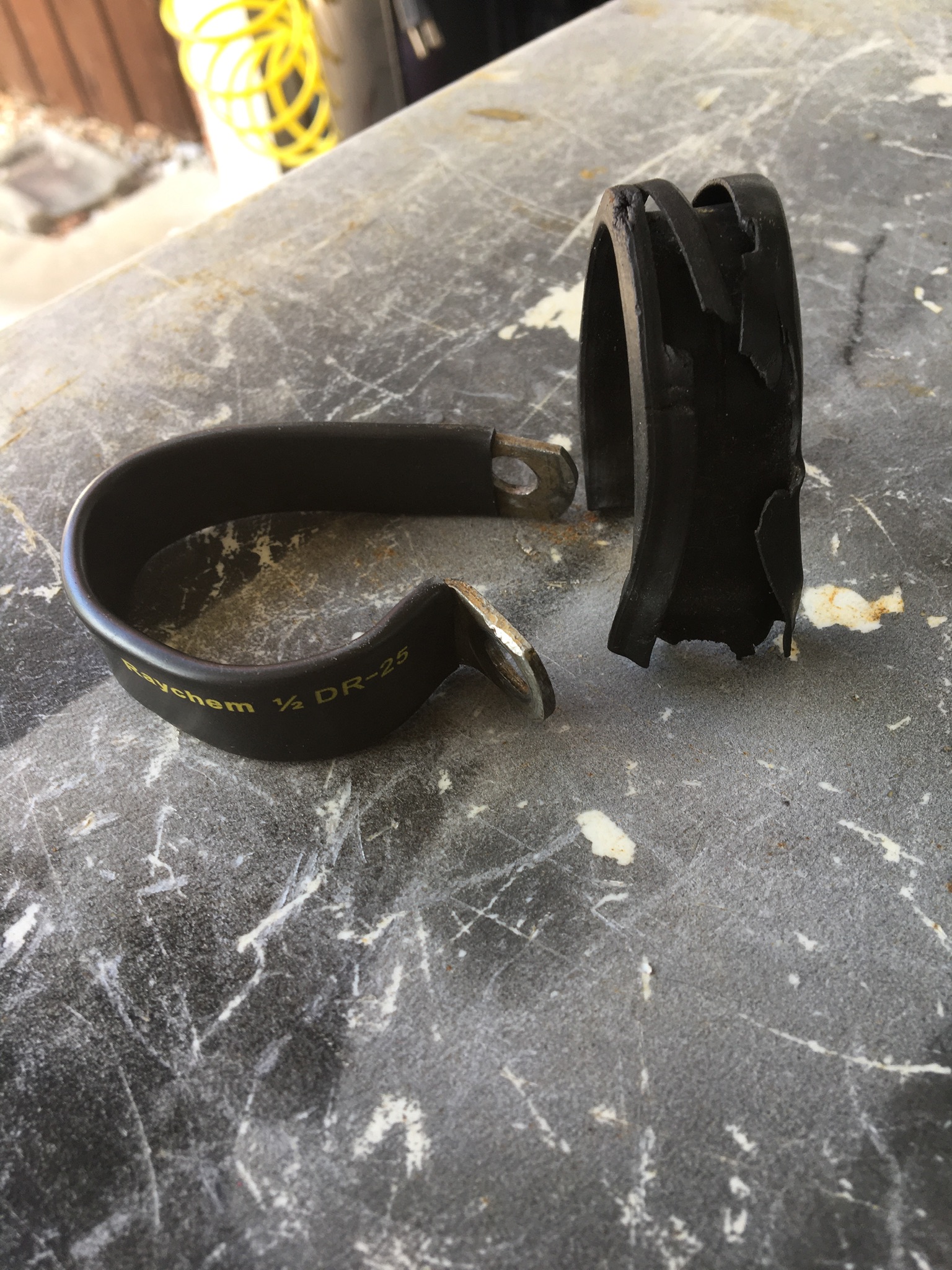 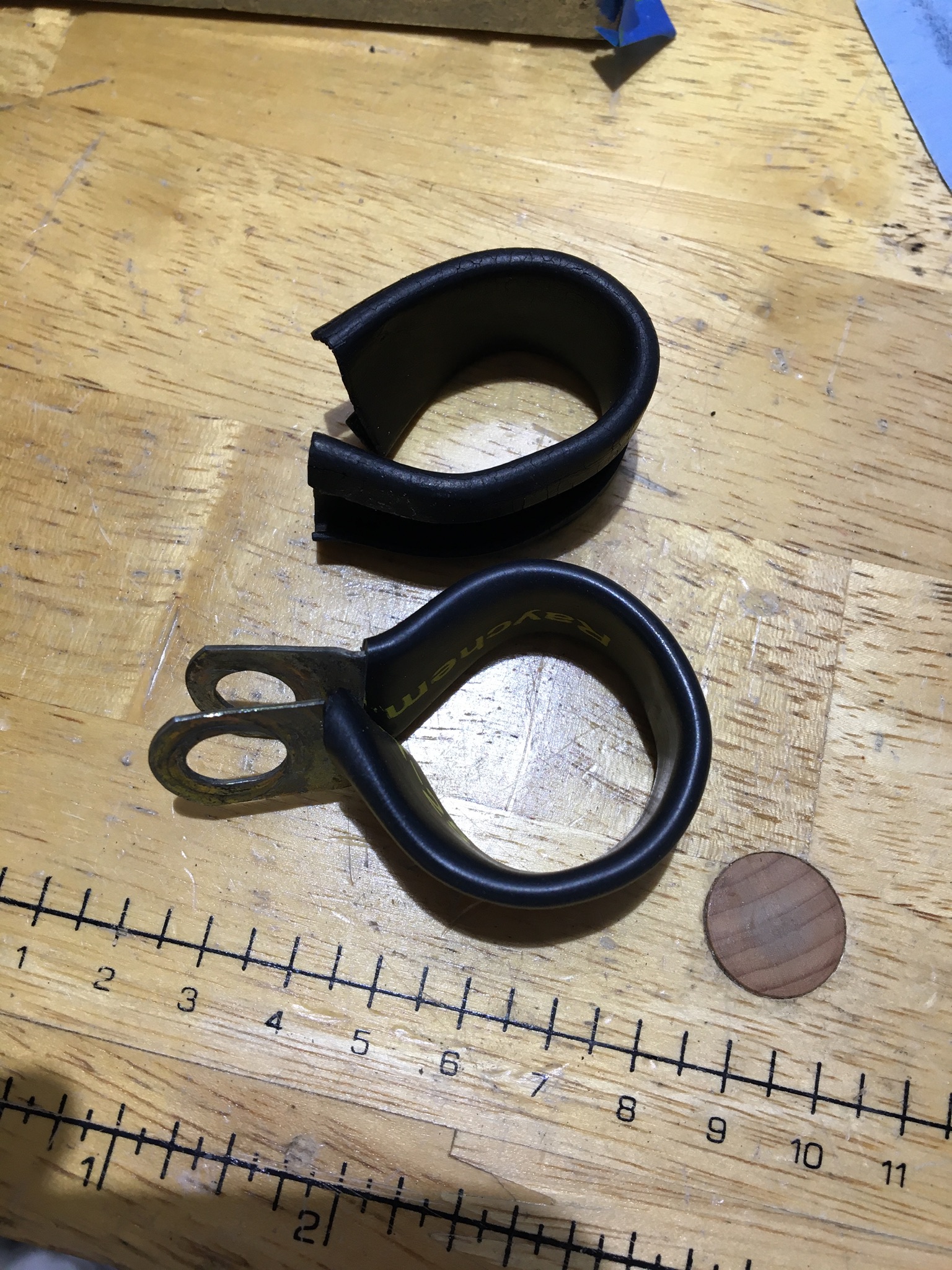 Got the new linkage set up and this is the 1st time I’ve operated the ITB’s using the gas pedal… I know its a small thing but it took me a ton of time to decide on what I was going to do, and then find & make the parts to do it. I ended up cannibalizing an old factory cable along with new aftermarket parts to make a solid throttle cable.

Tomorrow is cutting a hole in the floor between the gas pedal and the firewall for the 2nd oxygen sensor harness, followed by bleeding the brakes, and getting the oil lines, alternator installed along with the new AC compressor.

Then it is down to :
1. finishing the connectors in the V for the Knock sensors, the crank sensor, TPS, fuel pressure sensor & alcohol content sensor.
2. Cleaning the ITB’s and installing for the final time
3. Testing injectors and fuel system for leaks
4 filling with coolant and installing belts and fans
5. ECU check

By maddog2020  -  Wed Jul 07, 2021 11:34 pm
Quote
-  Wed Jul 07, 2021 11:34 pm #90142
Getting a lot done. Wasted a whole day chasing down an electrical gremlin, and trying to get the GB tilton clutch bled. Alternator is in, Oxygen sensors done. Using the newer LSU 4.9 oxygen sensors and the plug has a small board in it, so the connector won't fit thru the factory hole. Unibit did the job. Finding a suitable place to drill the hole on the drives side ate up a couple of hours. I'm glad I chased down extra large (34mm) grommets a few months ago. Still chasing the clutch bleeding issue. 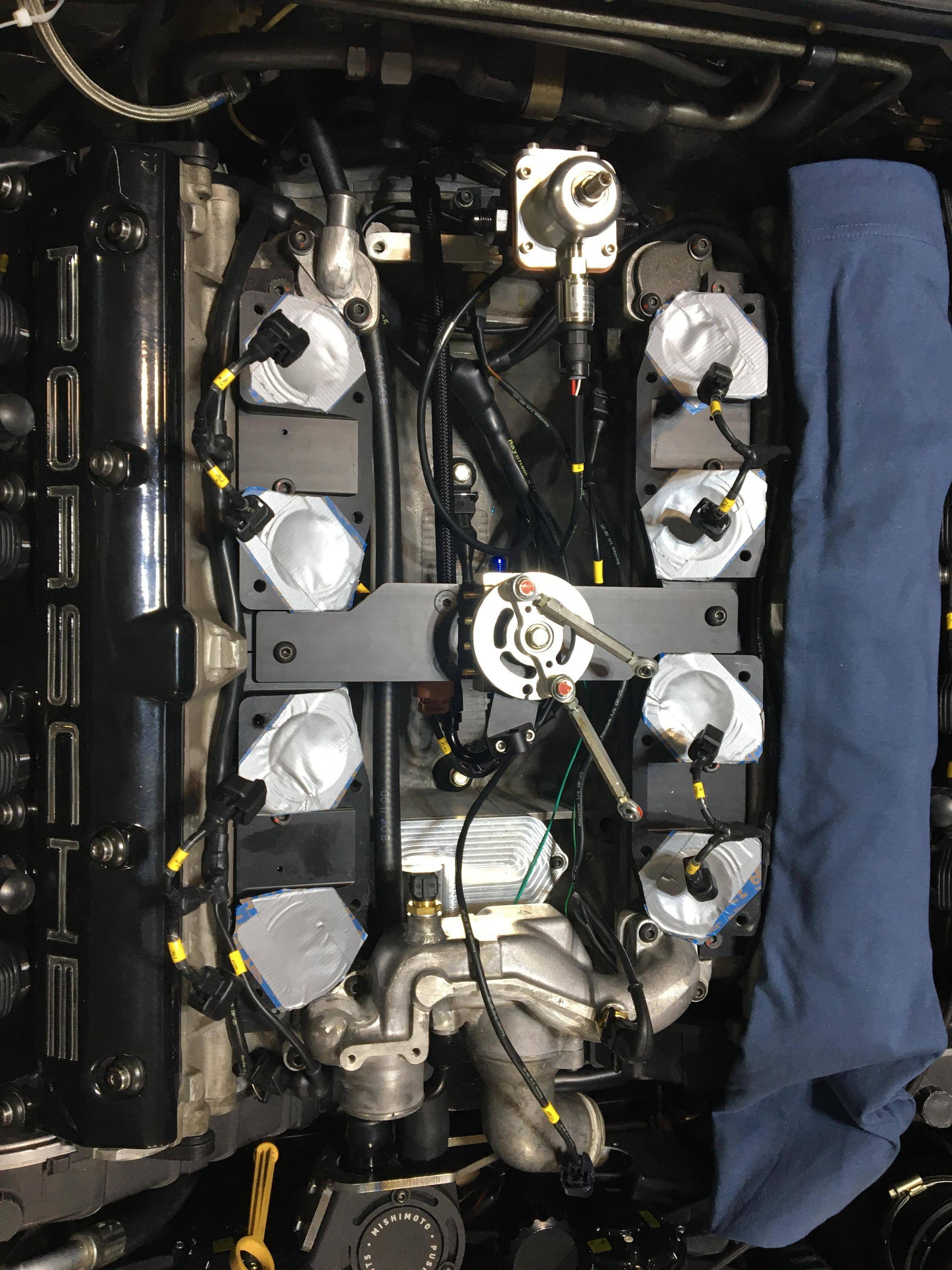 I’m passing on getting the AC compressor installed before startup, as I don’t have a working HVAC controller anyway. 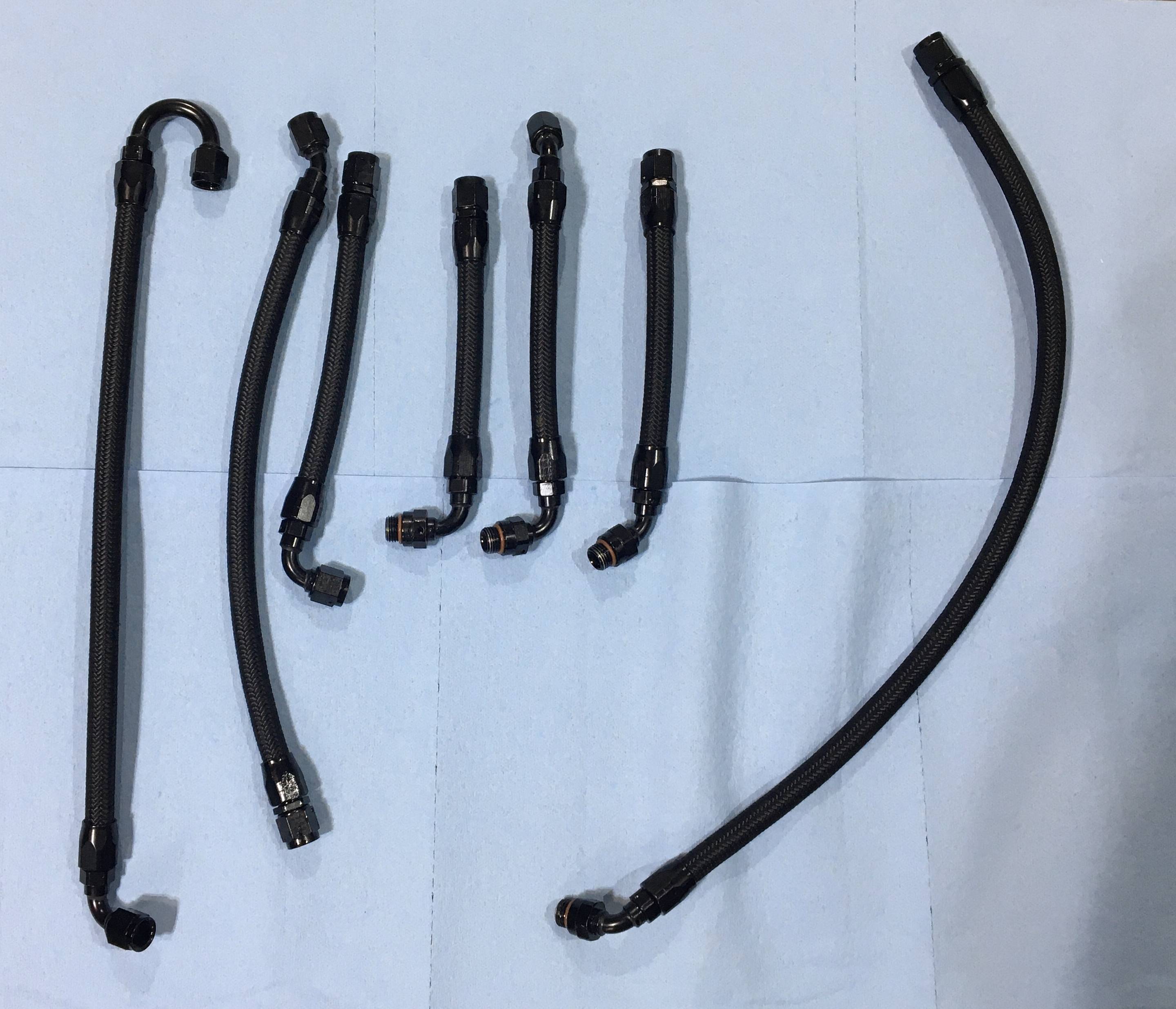 By maddog2020  -  Sat Jul 10, 2021 8:06 pm
Quote
-  Sat Jul 10, 2021 8:06 pm #90688
Done for today. I’ve had this stuff mocked up before many times, for different systems, wiring, fuel lines, linkages, but I’ve never had it all together. It looks really busy.. more than I wanted but still have vacuum hoses yet to go…..and the 4th ITB after I get the heater valve installed. I did and redid the heater hoses in back and under the V as I hated all the hoses looped around the front and then going back along the passenger strut tower.

Damn… been going at it all day. 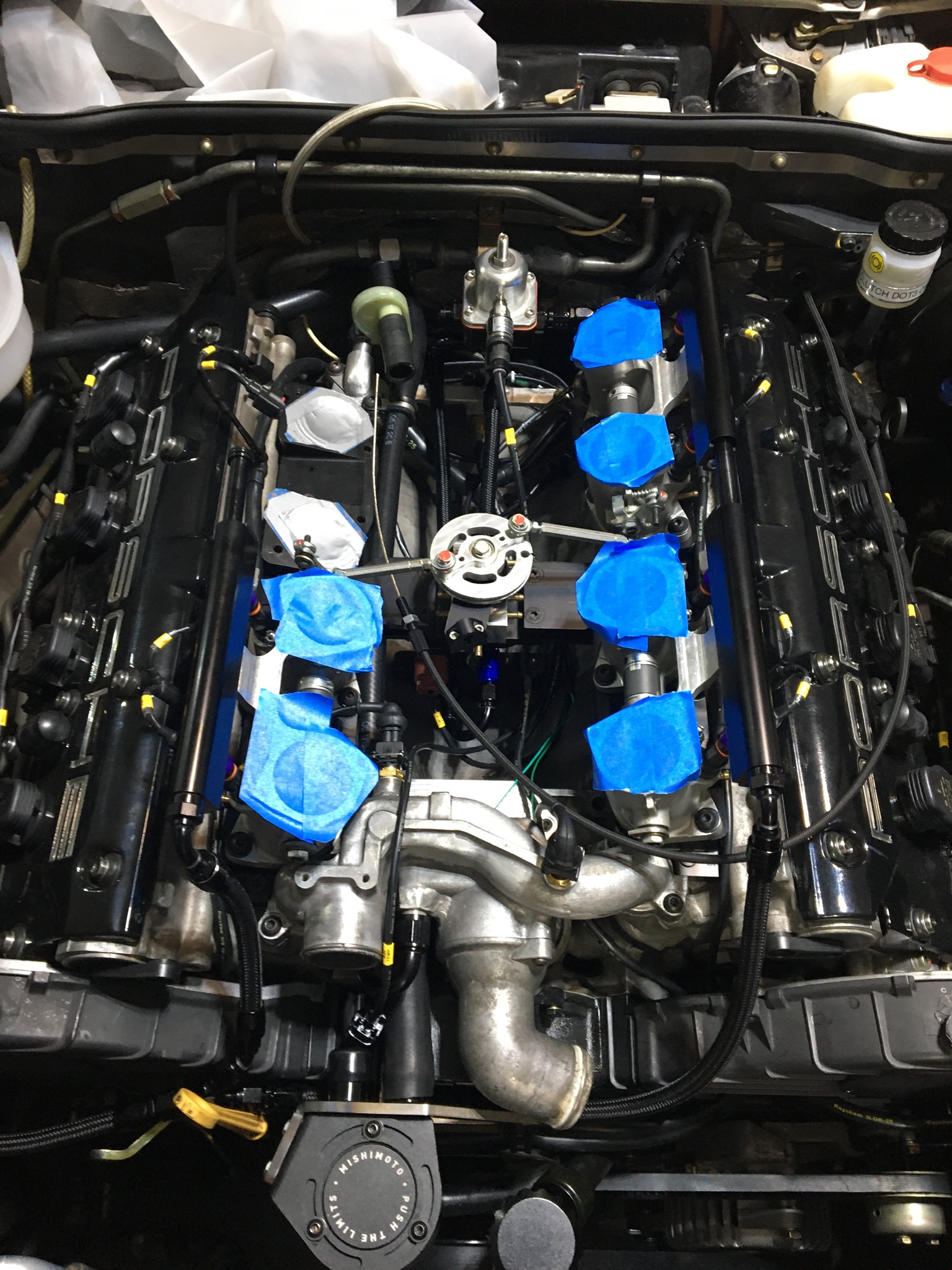 By maddog2020  -  Sun Jul 11, 2021 10:03 am
Quote
-  Sun Jul 11, 2021 10:03 am #90746
I had a conversation yesterday with a fellow 928 owner. he wanted to know why it takes so much time to get it back together. Most of it is my OCD. I see something and don't like the way it looks, and to redo it takes hours. I spent 5 hours yesterday on 2 heater hoses. One of my biggest peeve's of the 928 engine bay is the heater hose that comes out the front of the water bridge and then loops back around the passenger side strut tower. I routed it back thru the V with a 180 degree fitting and it merges with the heater hose behind the engine instead of under the coolant bottle. I mad this decision years ago and modified the water bridge to have a fitting instead of a hose boss. I've had at least one of these rabbit holes every day for the last 9 days. It robs valuable time but I want it done correctly. 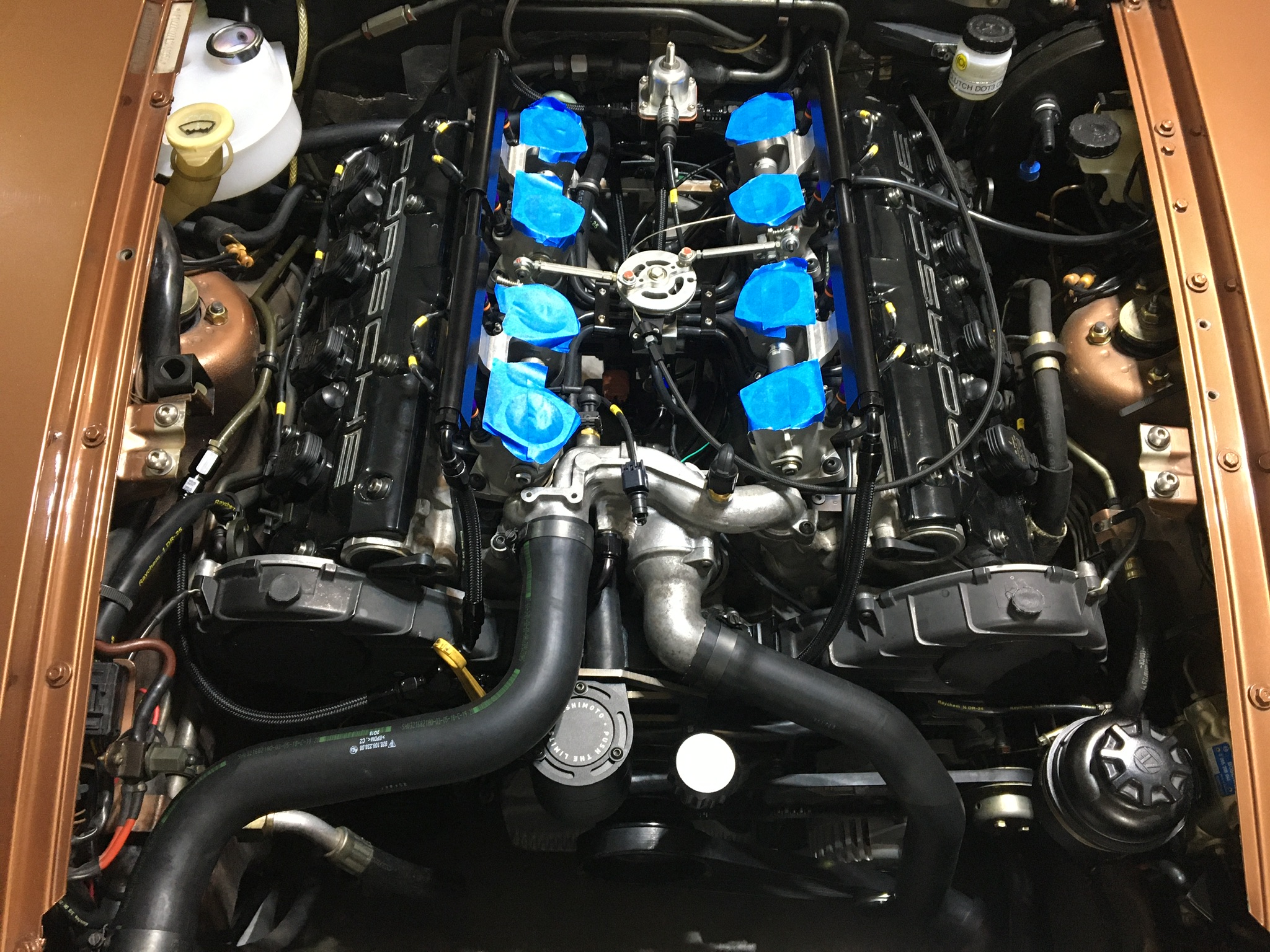 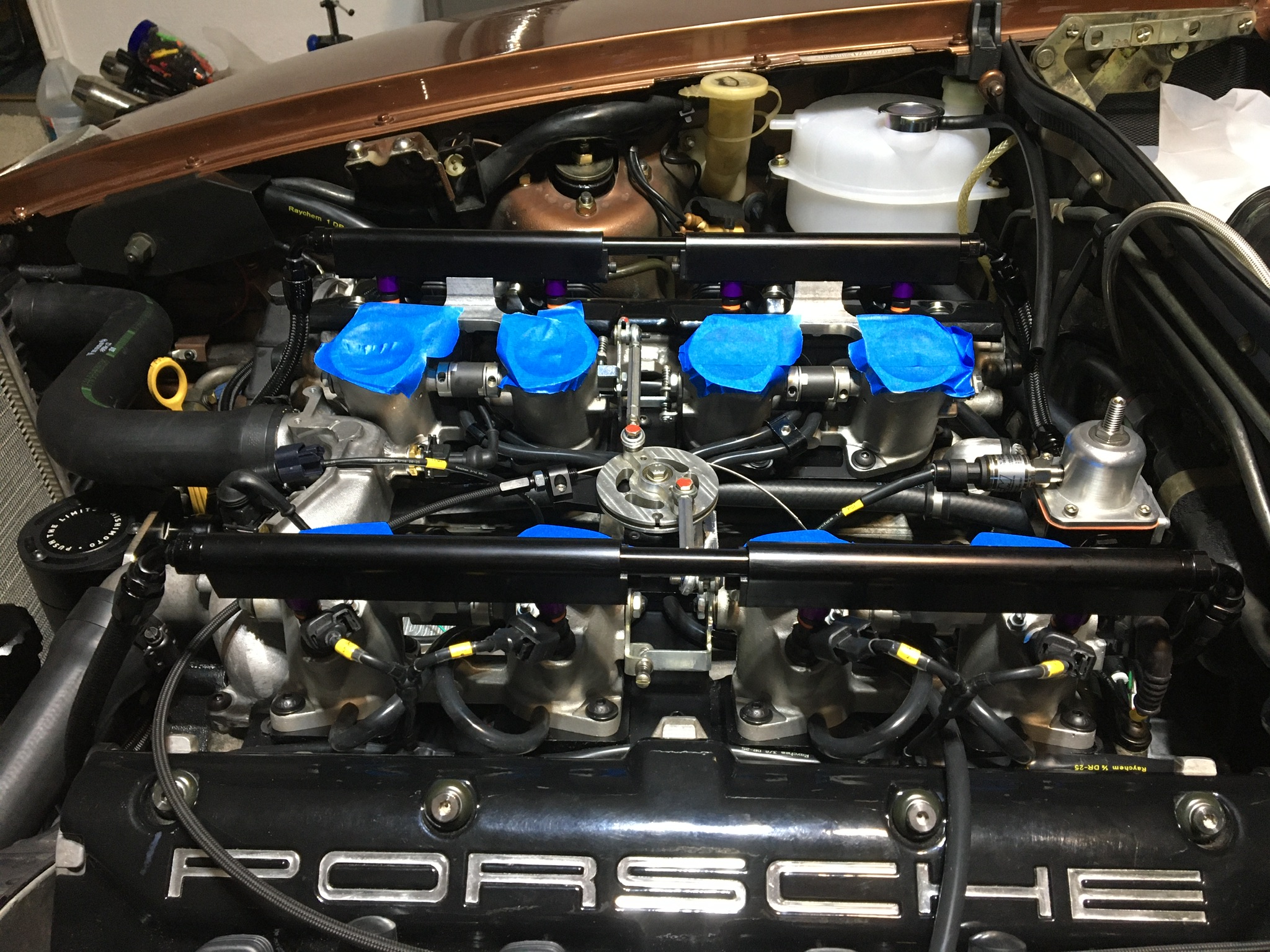 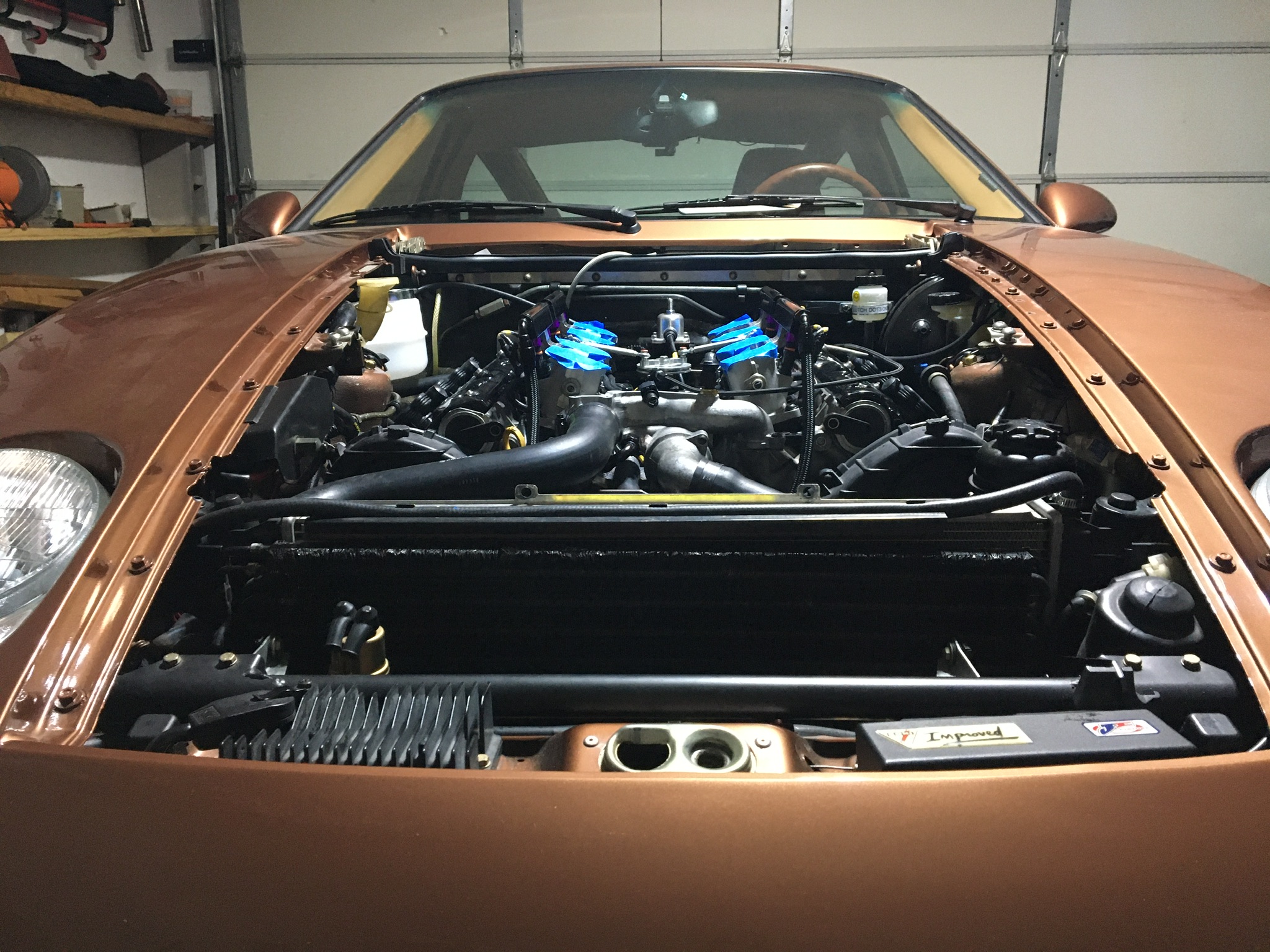 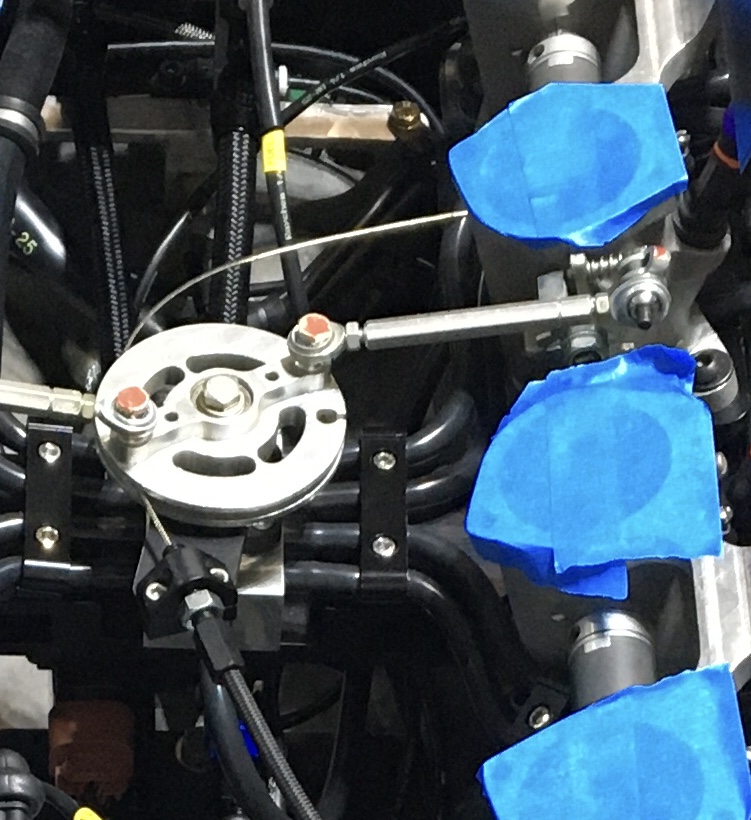 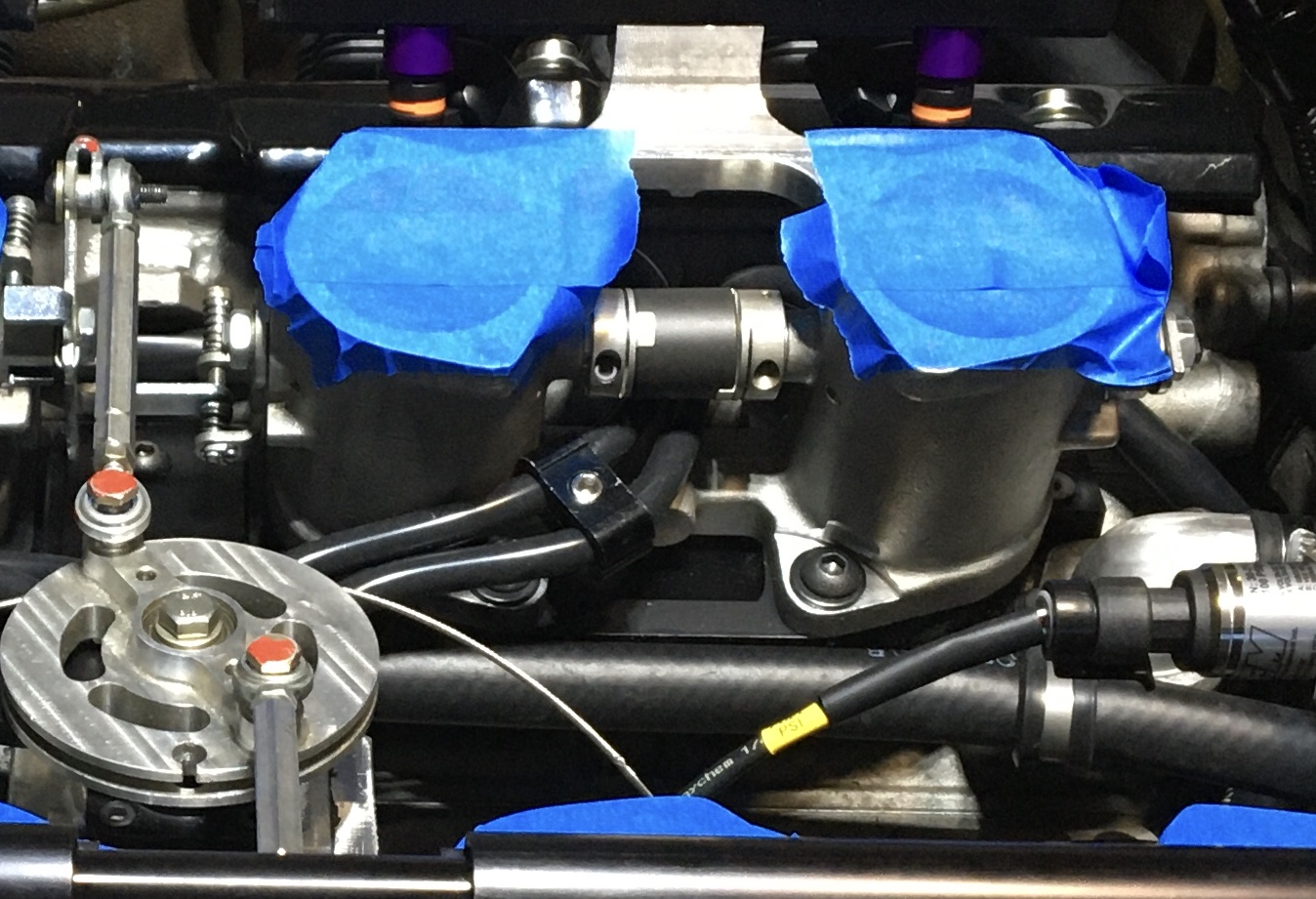 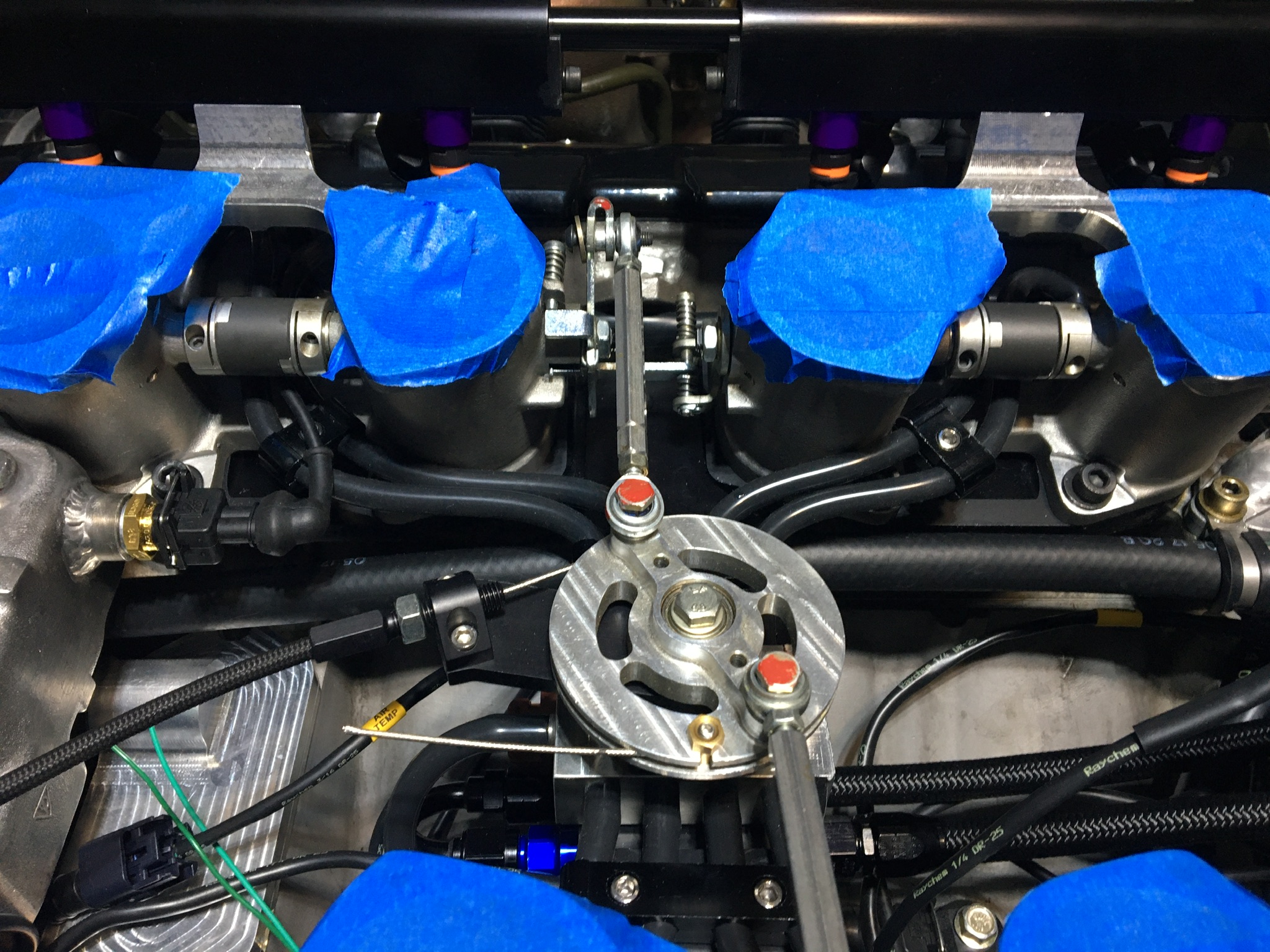 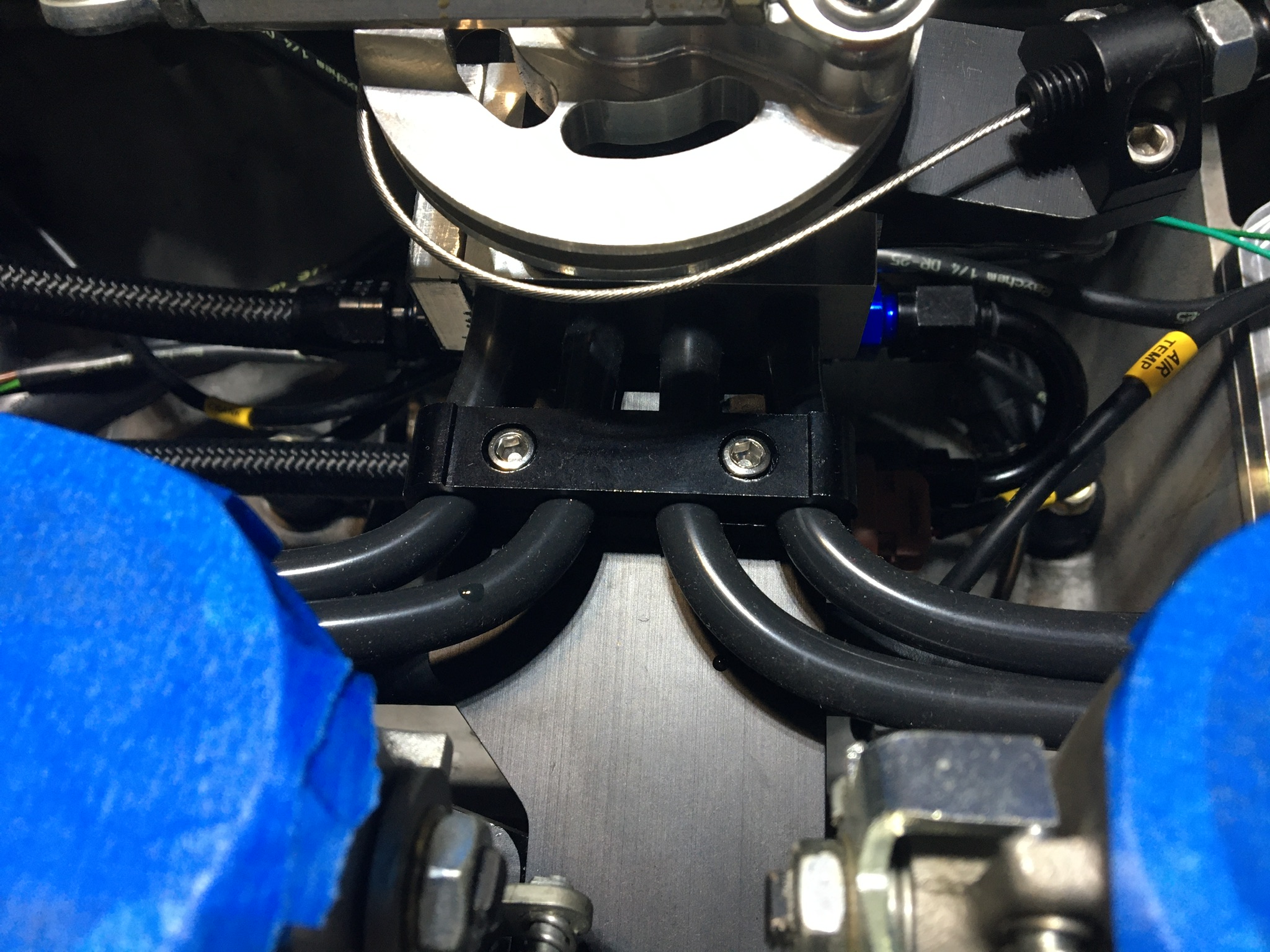 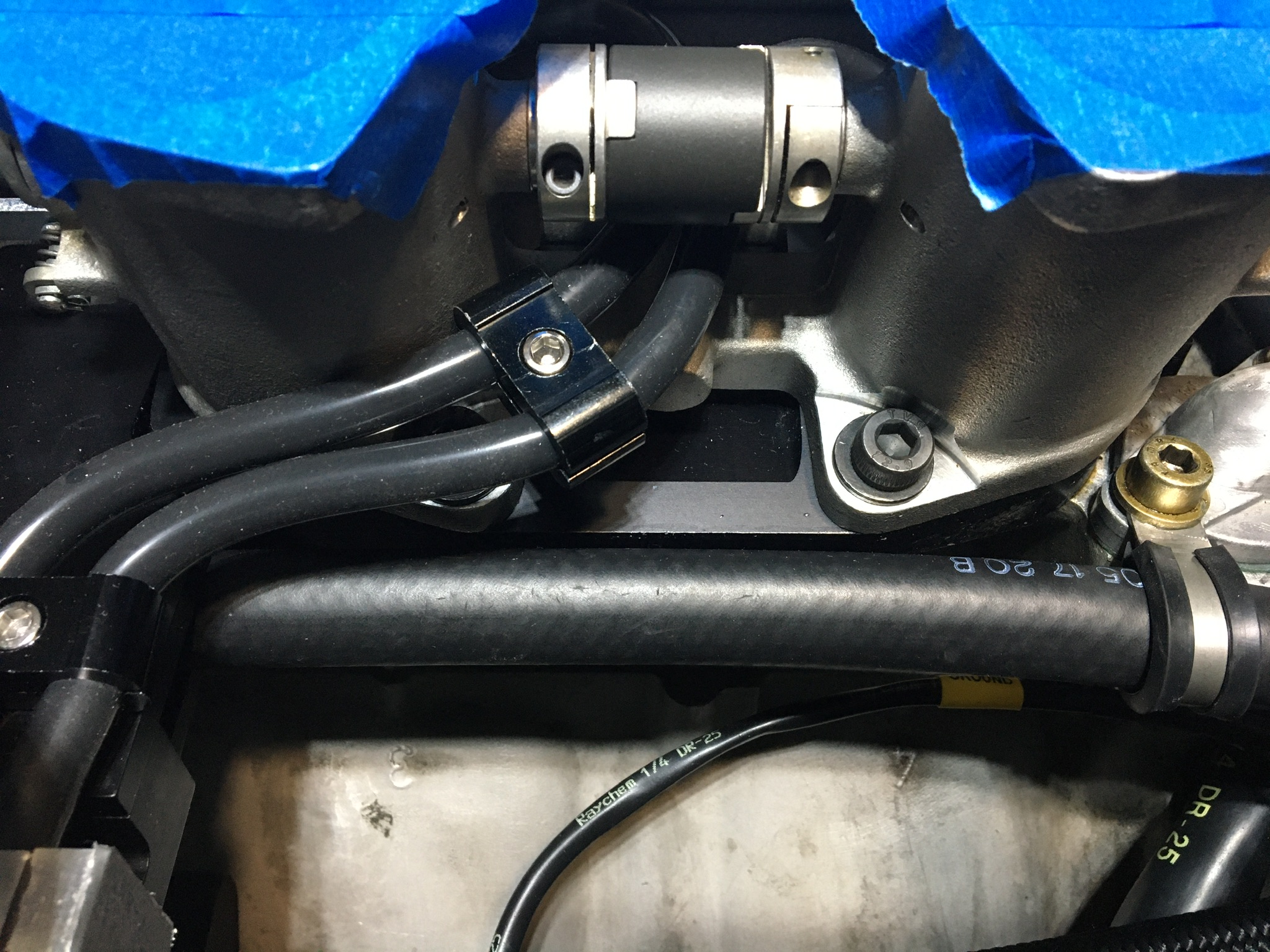 
yeah, this is a very special car. WOW

I have Louie's setup to install on my car but life keeps getting in the way.
I'm jealous.

Question: So you are ditching the fuel dampers? What about the fuel pulses everyone cried about in the last site every time the words 'damper delete' got mentioned?
Fred
1989 S4 Koenig widebody, 6 sp-Z06

By maddog2020  -  Tue Jul 13, 2021 4:43 pm
Quote
-  Tue Jul 13, 2021 4:43 pm #91384
I'm doing sequential injection so not an issue like factory that batch fires all injectors at once. the kit is a fantastic starting point. you will need to decide if you are going to port adapters to the head on the bottom and the top of the adapters to the 50mm round. This does create a really awkward transition for air flow. I had the heads ported to the ITB's and the adapters. I'm the only one who has done this. good for high RPM flow but could detract from torque in the low and mid range. 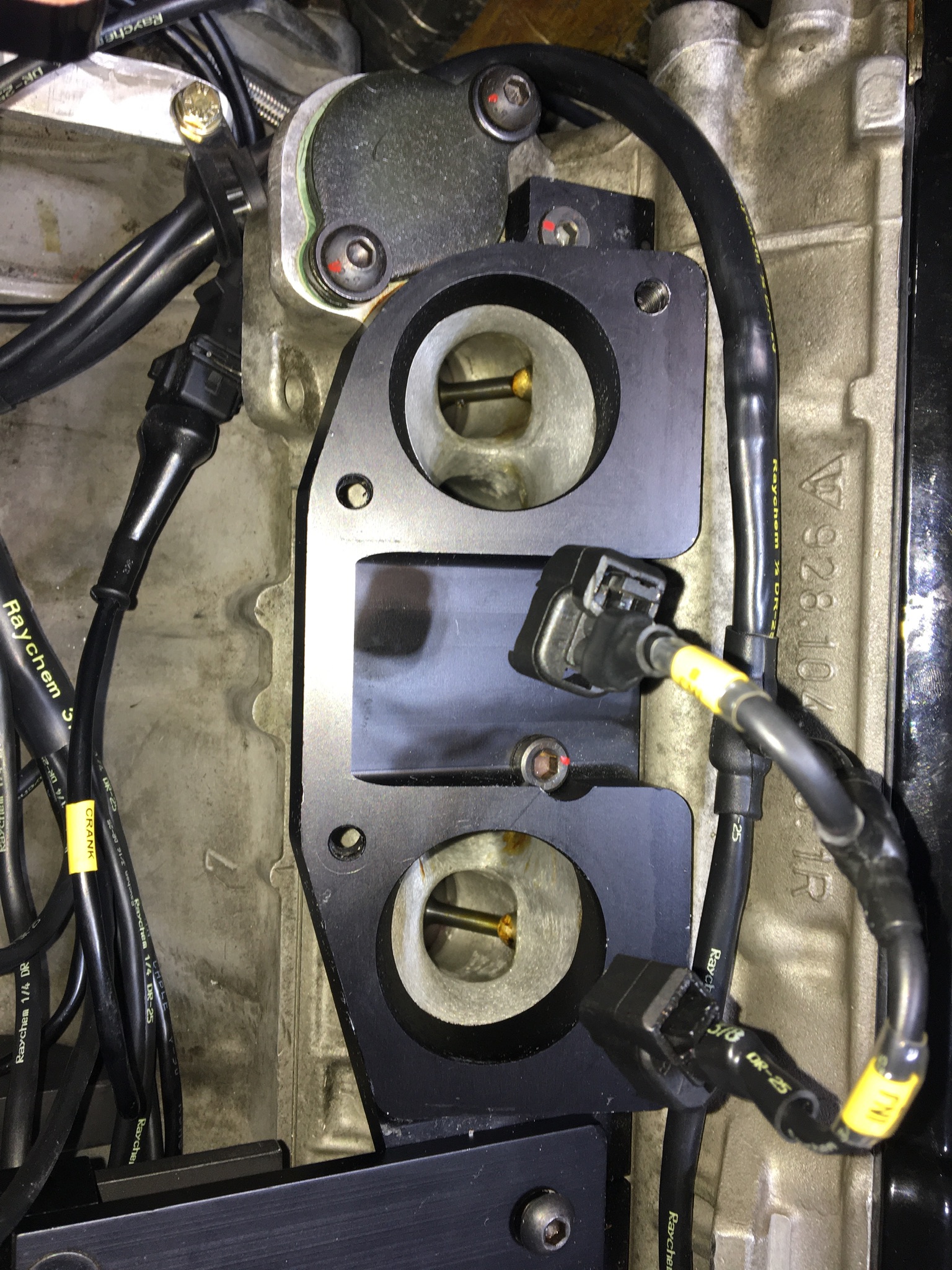 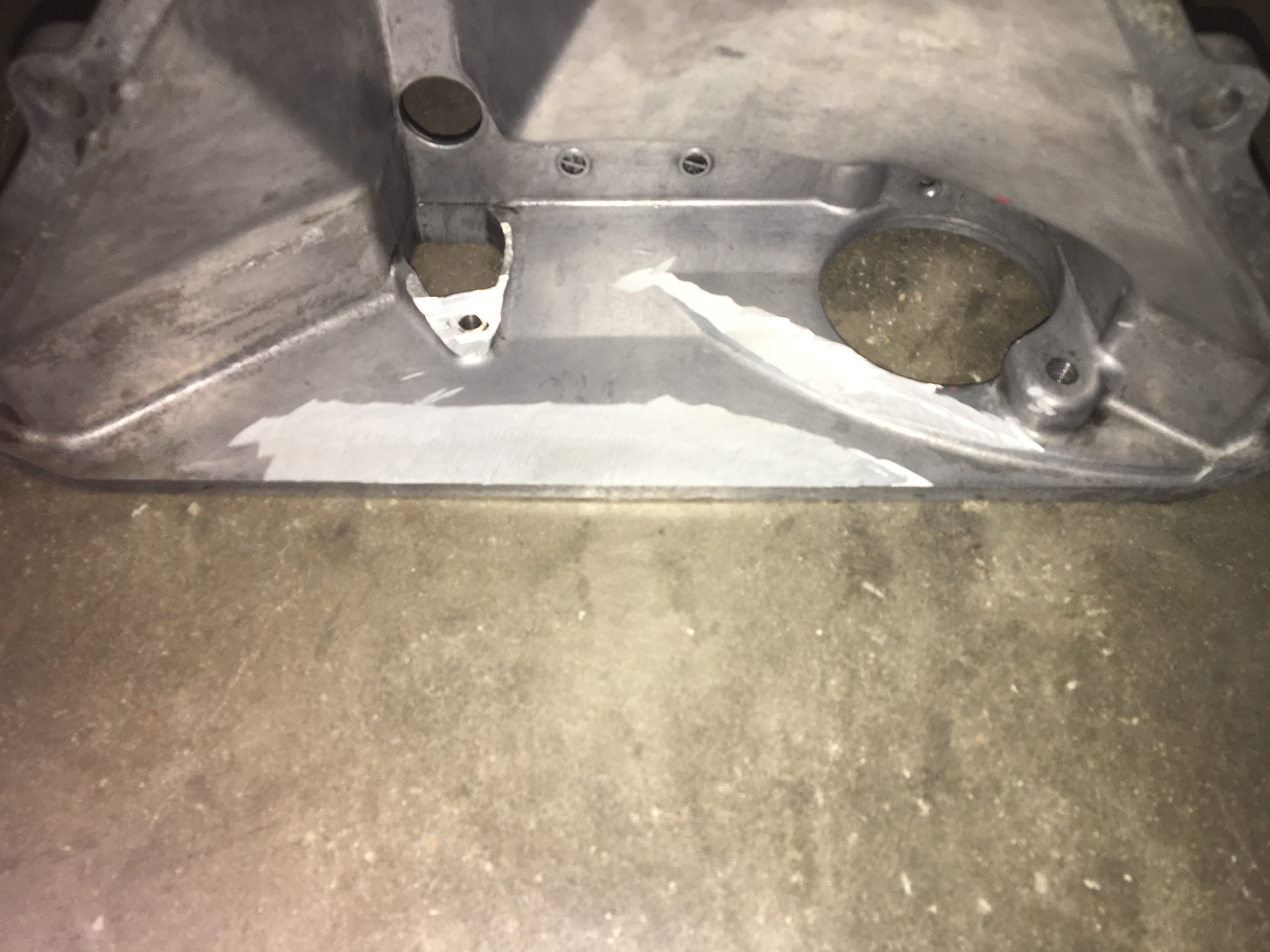 Cooling fans… kind of a home hacked together Derale kit from summit racing and modified. 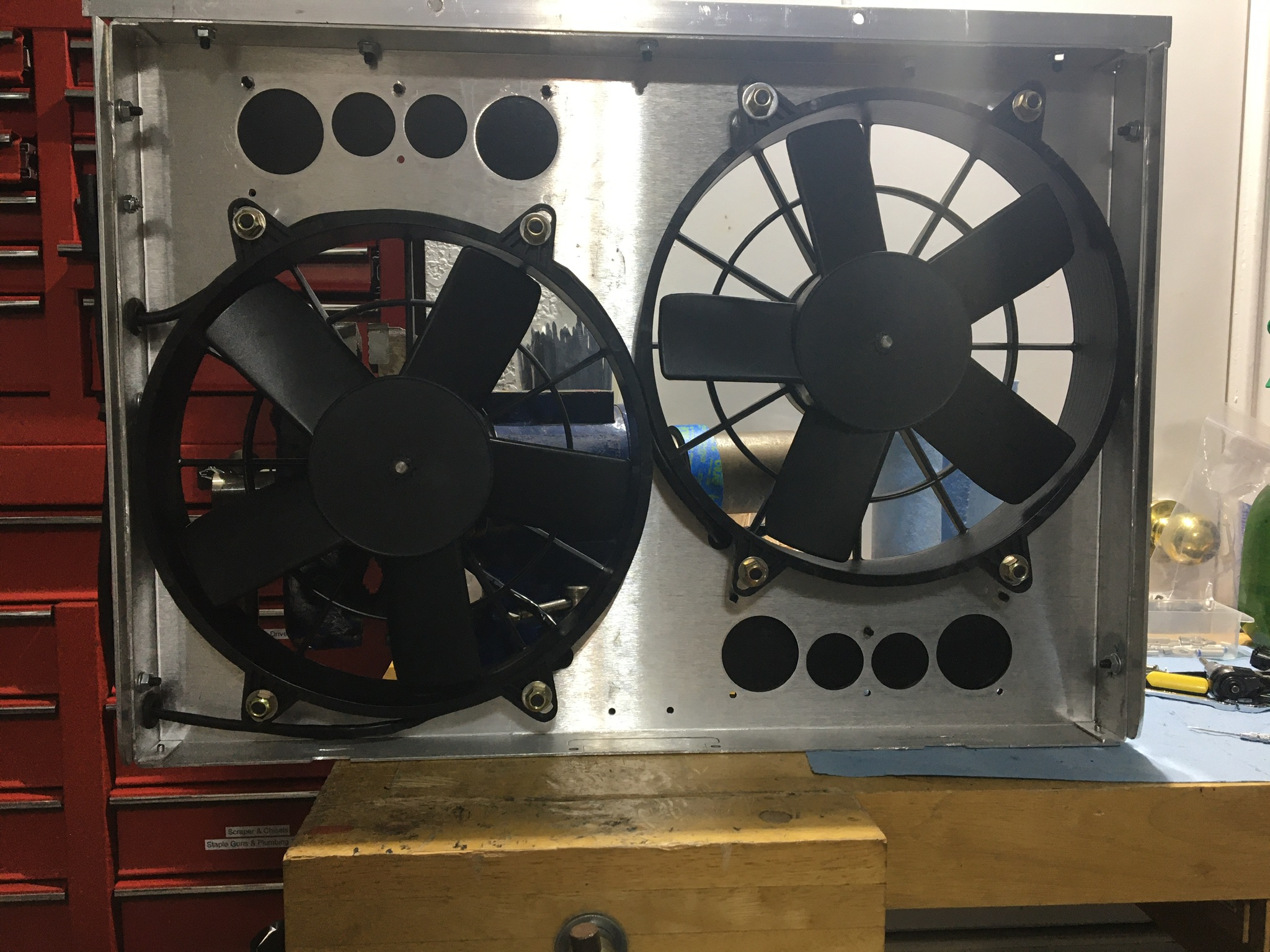 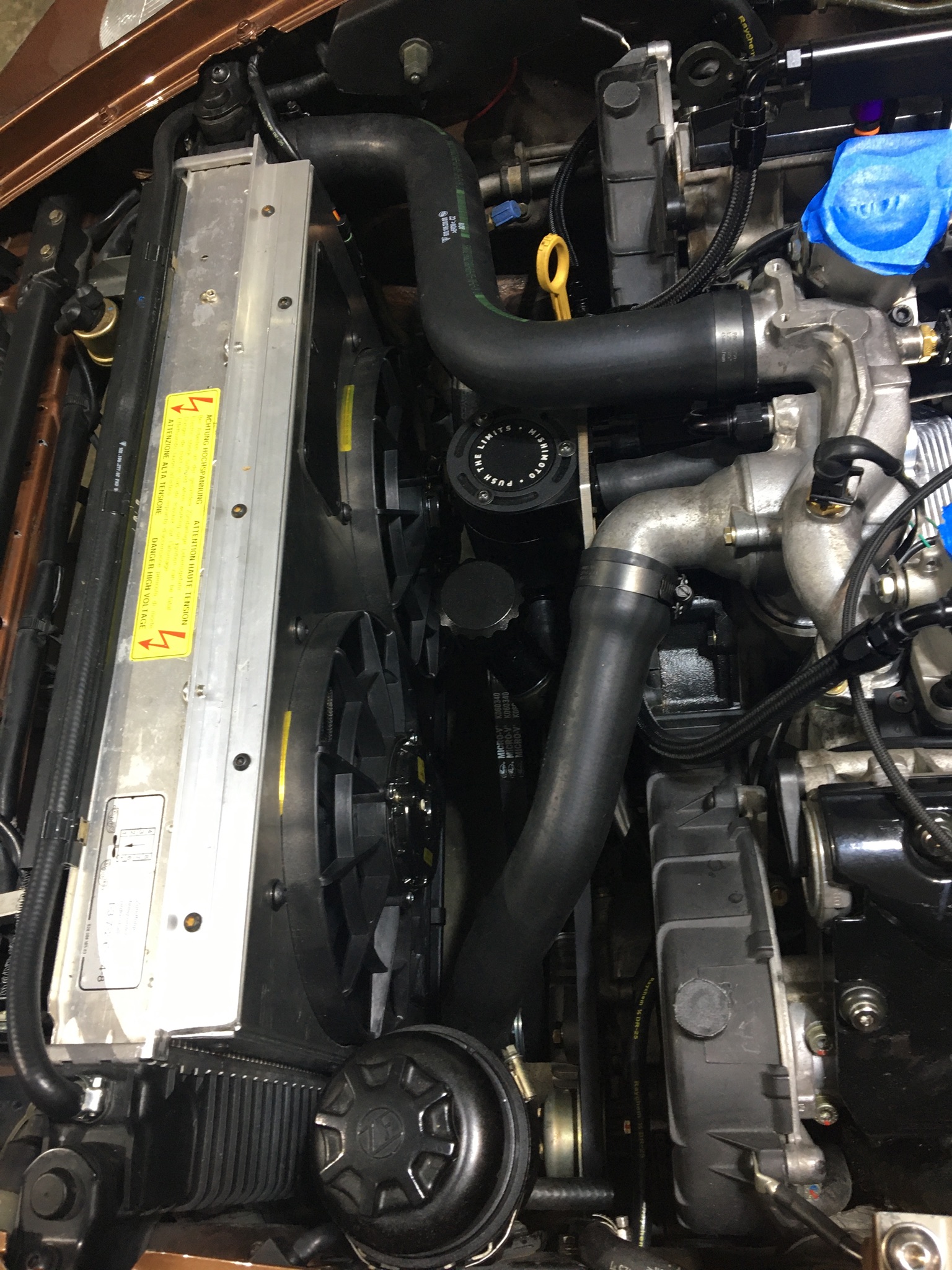 Obligatory overhead of the ready to start engine bay. 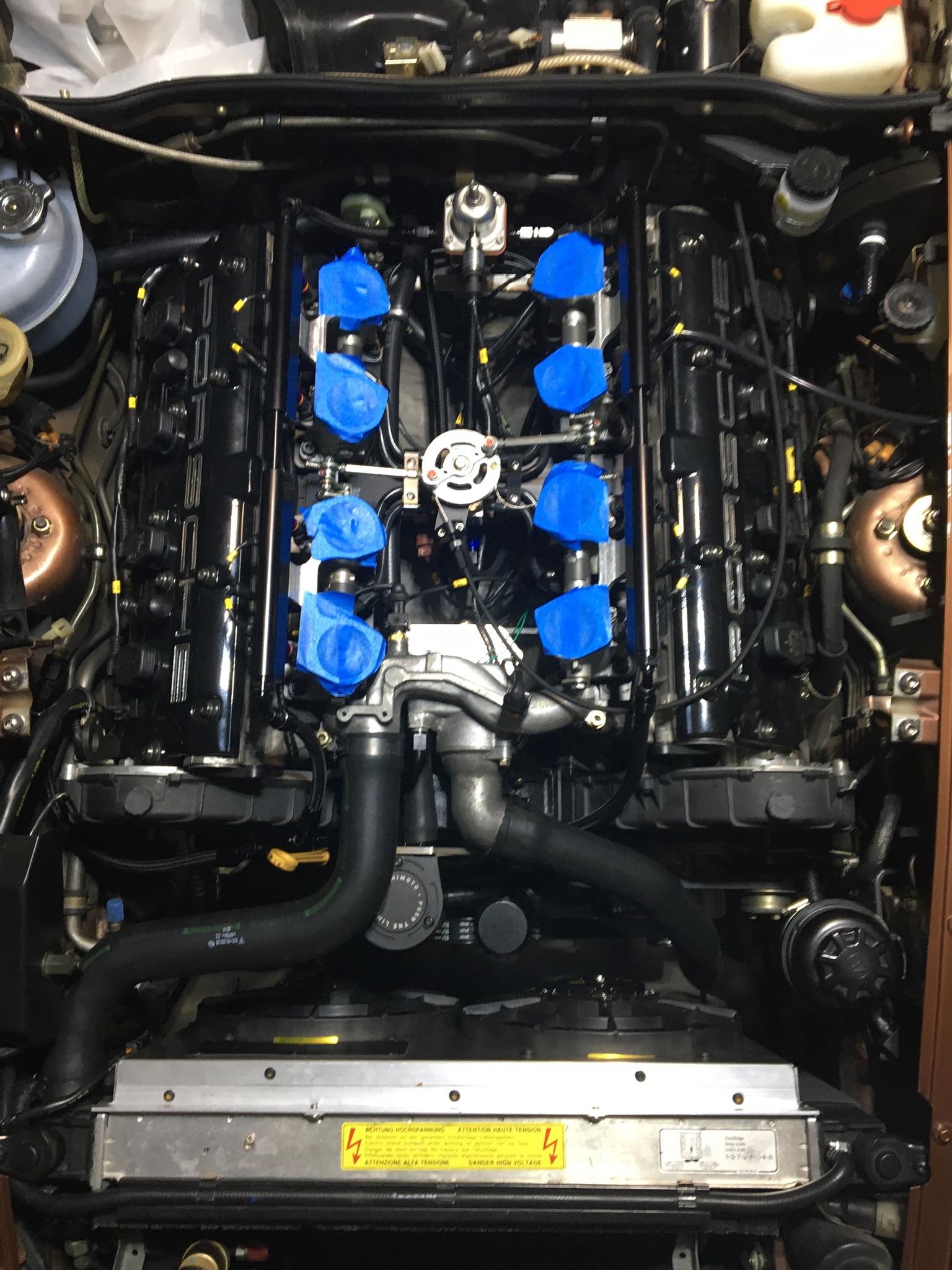 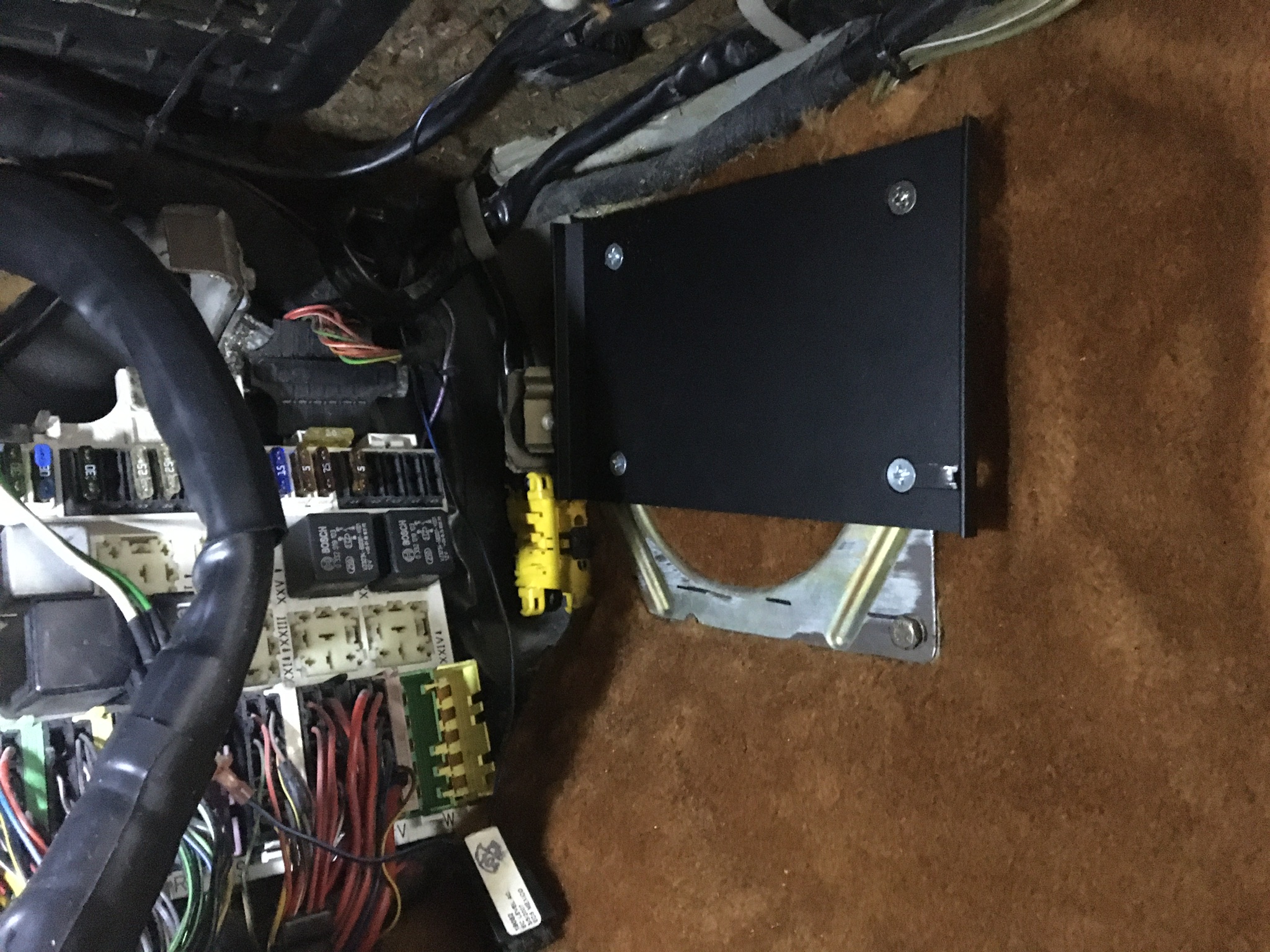 And everyone needs a bag o relay’s. These are new Bosch replacements for all of the 53 relays in the CE panel. 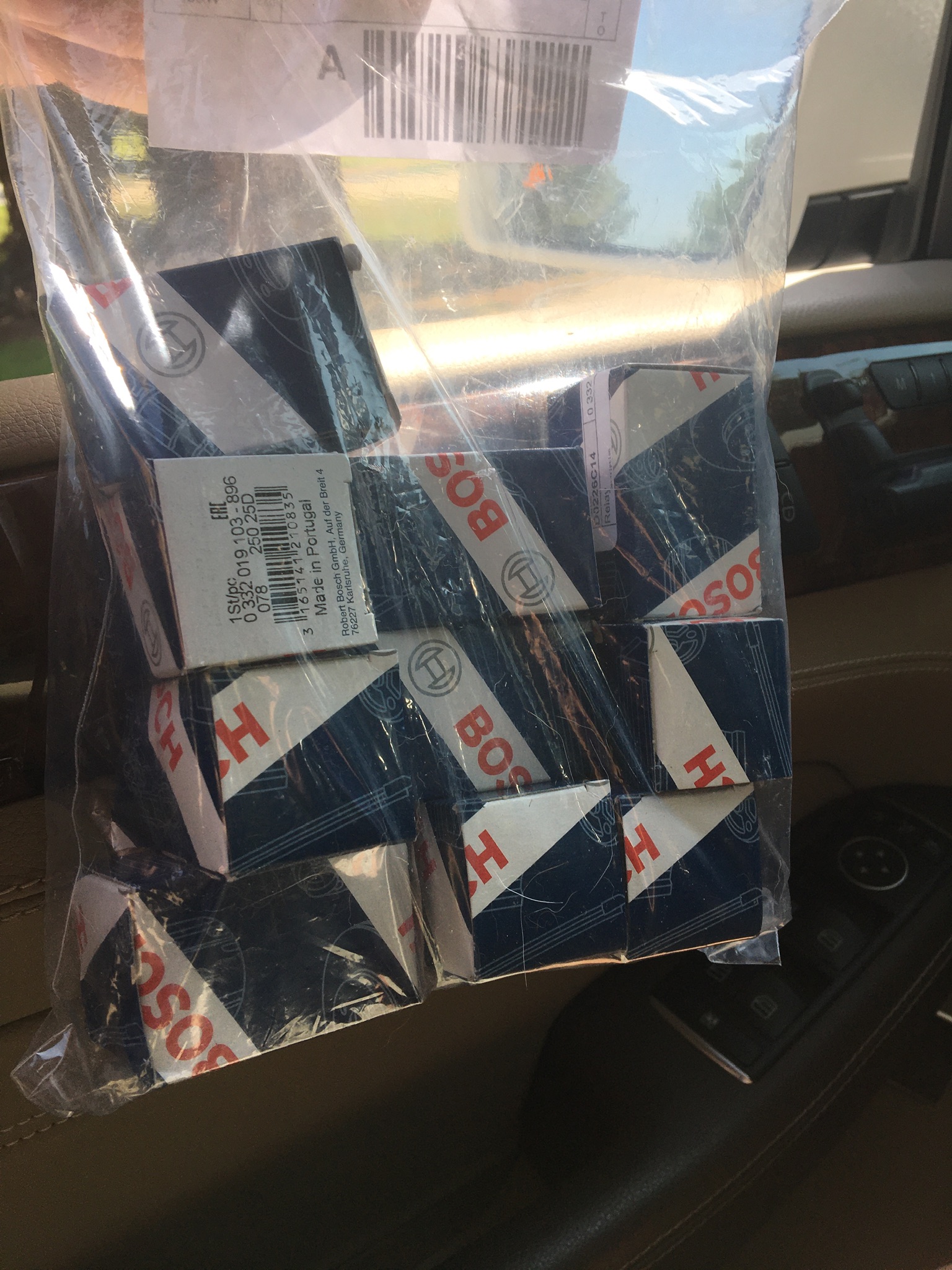 That’s all for this weekend. Have a pre planned dinner with friends.

Yesterday was ironic. I ran to a local hardware store to pick up a few things, and ran into Simon. Didn’t realize that we haunt the same hardware store. He followed me to the house and we were talking about the Tilton hydraulic release bearing. We poked around and we had the pedal actuating the RB by the time he left. That allowed me to get the lower bell housing buttoned up hopefully for final time.

Several 928's have been done with ITB's and they all ran amazing, however looking at them was painful for someone with OCD.

It's easy to make stuff functional, but to make it look good and function takes an order of magnitude longer. Deciding that I wanted to engine bay to be as artful as the rest of the car has been a curse.

Getting off TOS and FB allowed me to focus even more intently on the minute details. Hundreds of hours spent scouring the web looking for little fittings or bits I could repurpose. It does crack me up that I used a $10 set of billet spark plug wire clamps for managing the vacuum hoses. 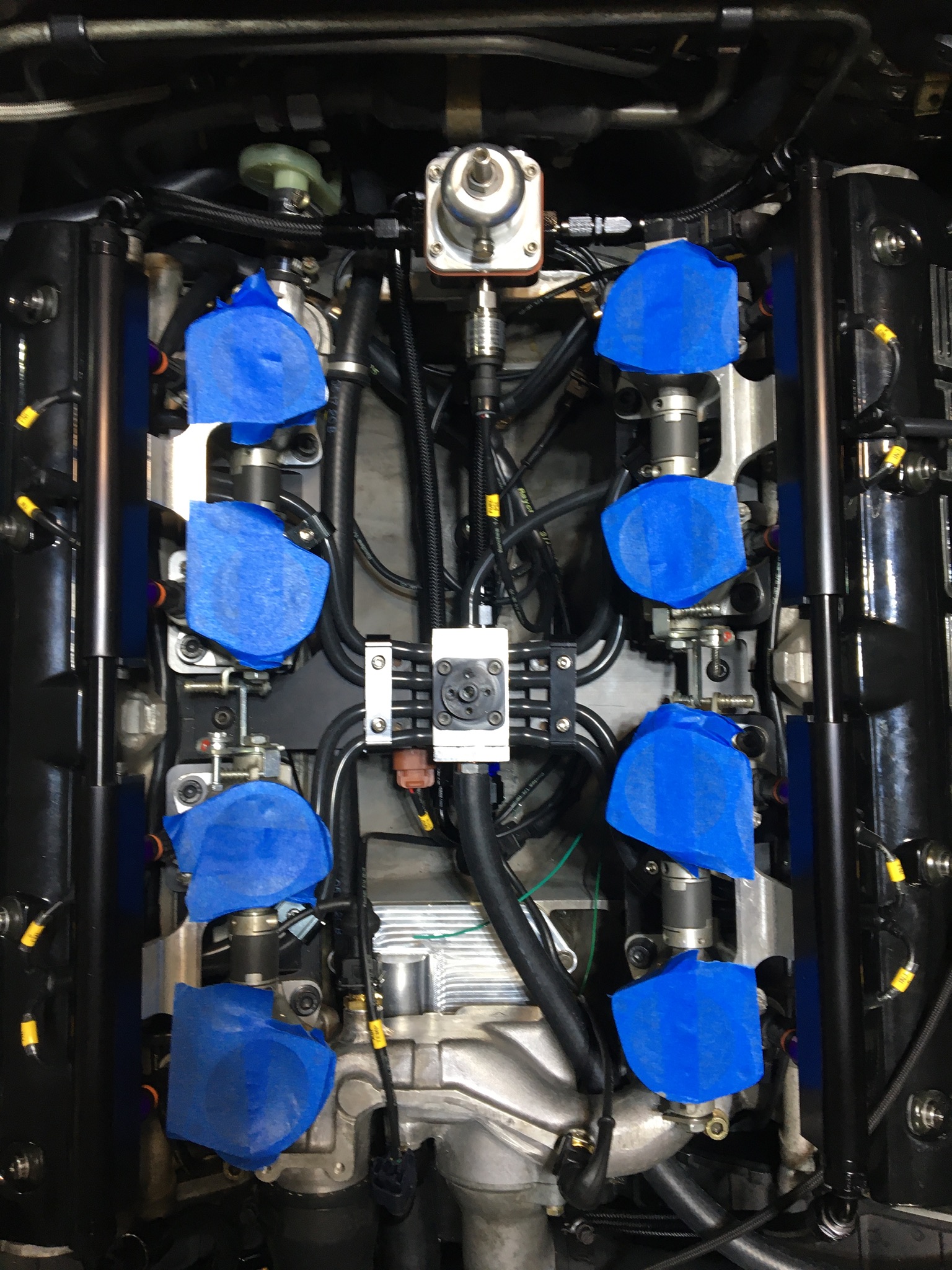 I struggled with how to make the factory throttle quadrant work and look good. I struggled with that for years. I made 6 different brackets and hacked up numerous quadrants. In the end I decided to ditch the cruise control and just use a simple throttle cable. Functional and it blends in. there goes several hundred hours. lol

I still don't even have an airbox figured out yet. Once it is running and I can dyno and tune for different lengths of horns, will determine the airbox shape and design.

I would love to find someone that could make a clear airbox for it... most of the time my budget does not allow for the really cool stuff so I have to make due.
Mrmerlin liked this

Not a very productive weekend, but I need some more heat shrink tubing and I needed some down time.

Not a very productive weekend, but I need some more heat shrink tubing and I needed some down time.

I was replacing my fuel system at the tank, as you know, and thought…gee I could do this, and fix that but then reminded myself to not go all “Sterling” on this and just get the f*er back on the street. As you can see, my OCD is quite dead.
Ex RL whore.

adding a completely heat shrinked motorsport harness to the factory CE panel is crazy time consuming. Every time I route some wires, I look at it and picture Sean standing there looking at it and saying "holy mother of god, who dicked with that wiring". Then I re route it. ECU & associated wiring is quite a bit more busy than the factory stuff, sequential injection COP, & a ton more sensors. Adding the transmission harness and an extra O2 sensor really makes this space compact.

Using the factory relays (EZK and LH) to power the Injectors and COP’s, should make for a clean install. 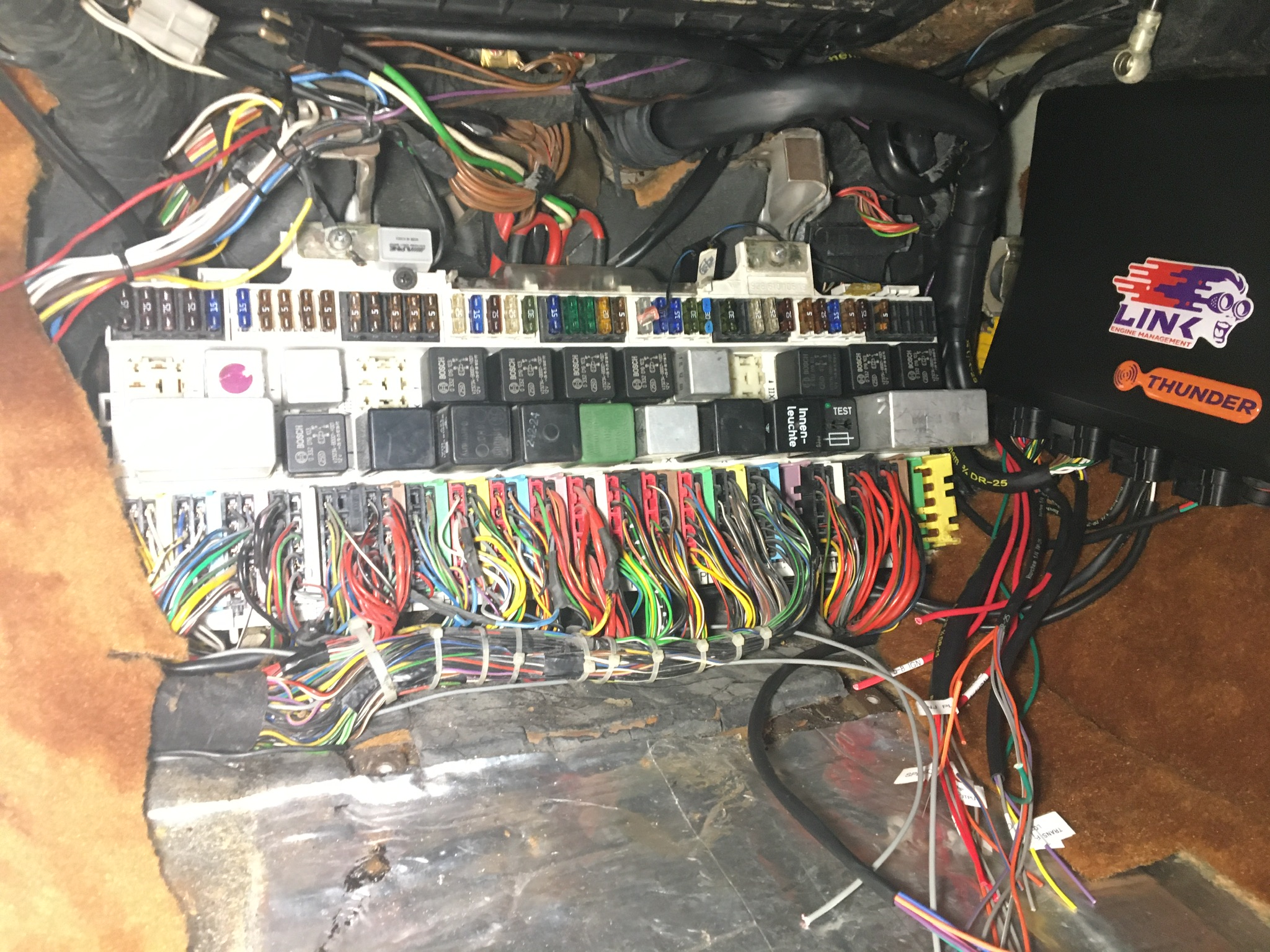 The ecu has the ability to light up multiple check engine lights during different scenarios. The 90 model instrument cluster has a check engine light, (but was not used) and the CE was wired for it, so that will be a low level warning. For a critical warning, I’m going to use the animated timing belt warning if something really needs my attention. I’m using the porkensioner, and since all of us 928 owners are hardwire to skip a few heartbeats, I figure that would get my attention.

And now Lulu is saying he thinks he has long Covid[…]

shifter end. Look for the screw that tightens th[…]