By captainOCD  -  Wed Aug 04, 2021 7:14 pm
Quote
-  Wed Aug 04, 2021 7:14 pm #95975
In 100 degree and humid south cakalaky the mechanical fan (even with a new clutch) was starting to struggle to keep water temps where I'm comfortable with if you get stuck in traffic for extended periods of time, with the ac on too of course. Not overheating hot, but still getting to the neighborhood of 215 degrees on the water bridge, which in my mind at least is far too hot for a 170 or 180 degree thermostat.

Some scouring around showed that ford contour fans are about the same size as the 928's radiator. Fortunately for me the local pull a part had some of those in the yard.

Some initial data before taking things apart; with the fan clutch fully engaged it was pulling air at a speed of ~1.5 m\s through the radiator and ac condenser (measured in several spots). 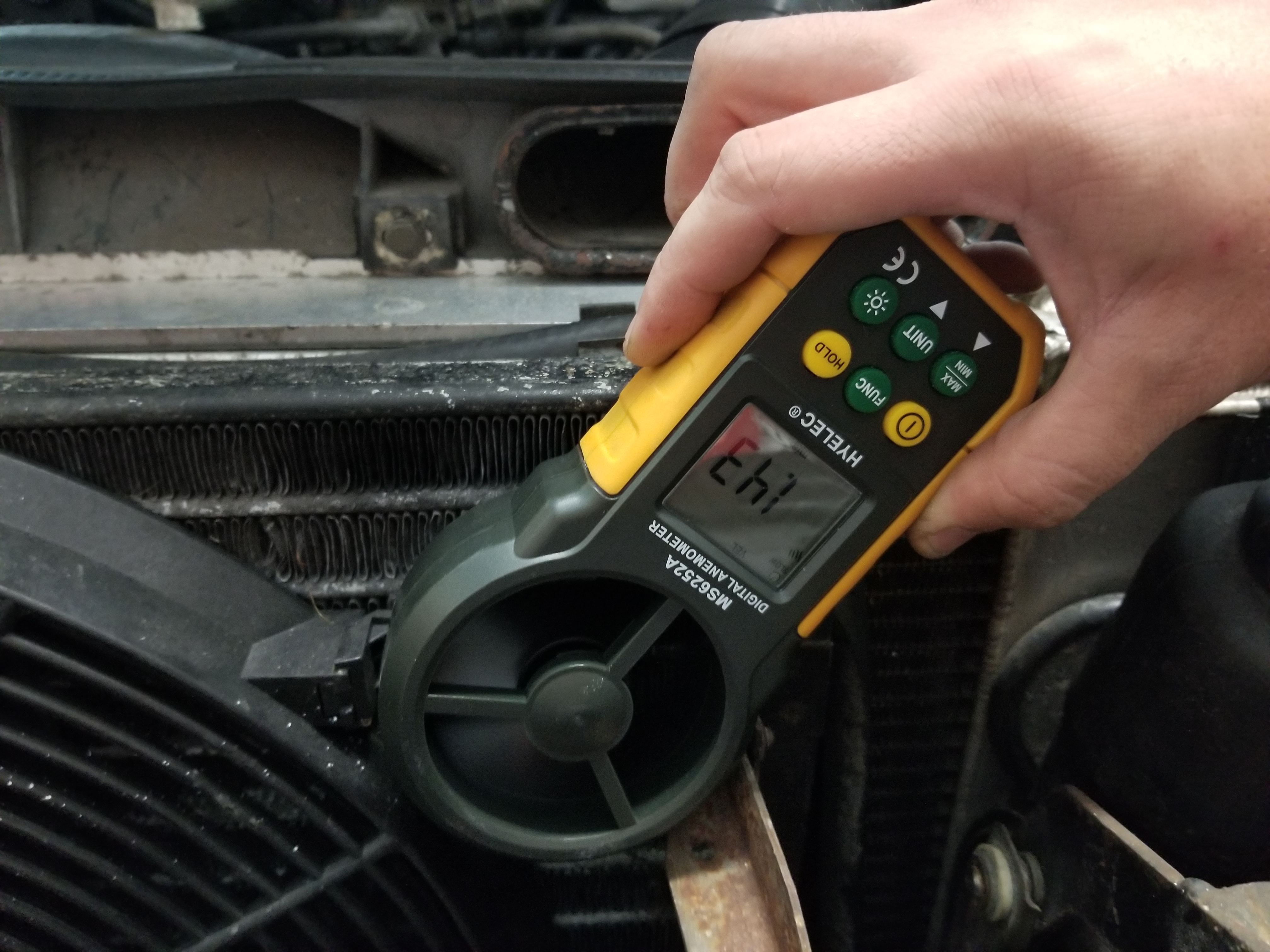 Modifications to the fan were just stripping the extra air temp sensor and other wires not for the fans. The side mounting ears got trimmed off too. The top part of a spare (and already damaged) fan shroud was cut off so that it would nestle over top of the electric fans. 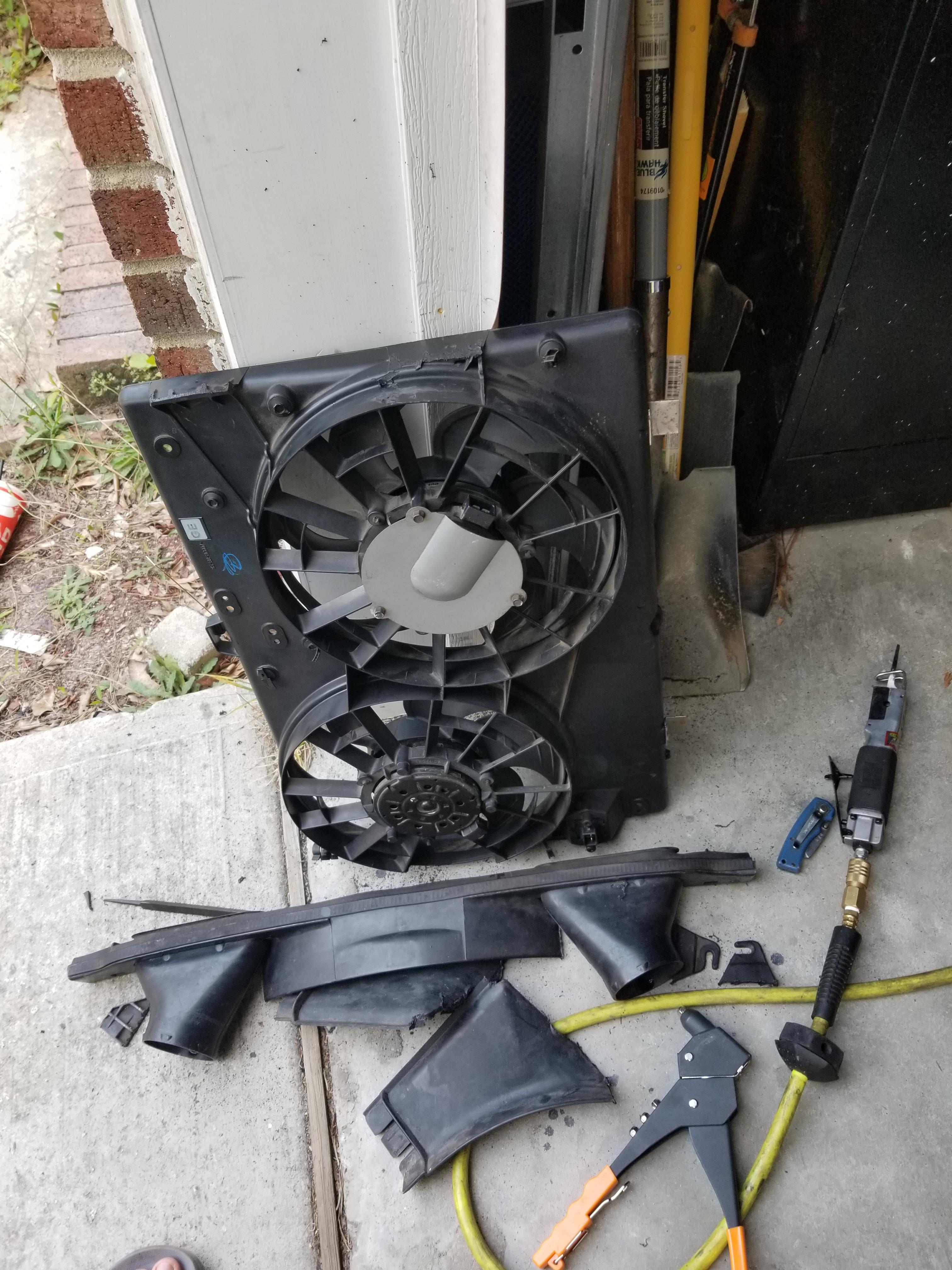 Fits nice and snugly in there. I wound up having to leave it shifted about half an inch towards the driver's side due to some ac lines on the passenger side. 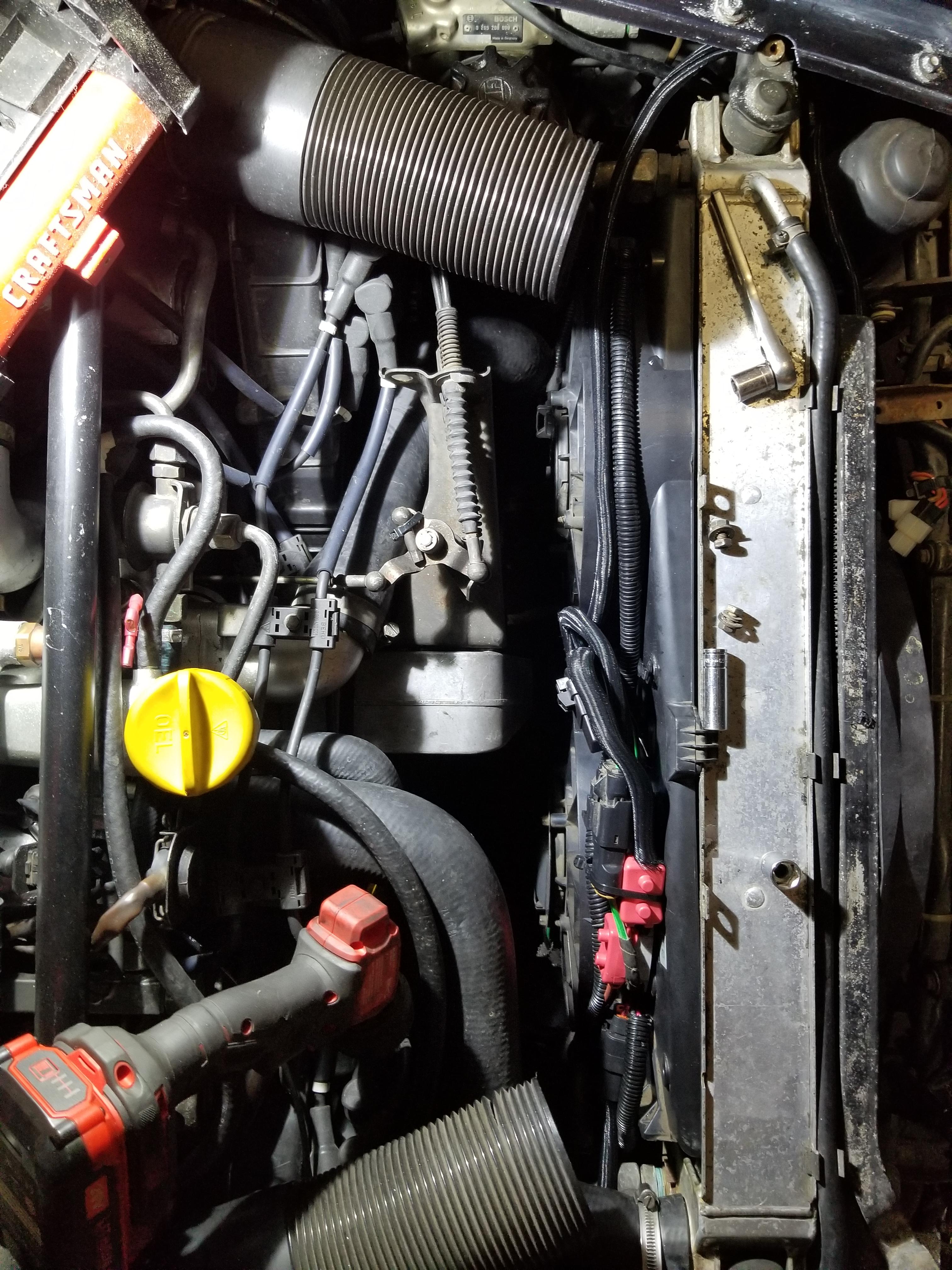 Some simple bent metal tabs are riveted to the bottom of the fan where the stock shroud hangs. Same up top to catch the bolts for the remaining part of the original upper shroud. Wiring just consists of two 60a weather sealed relays (one for high speed, one for low speed) each with it's own auto resetting circuit breaker (40a in this case).
(ignore the dried coolant from the radiator hose incident, it was cleaned off) 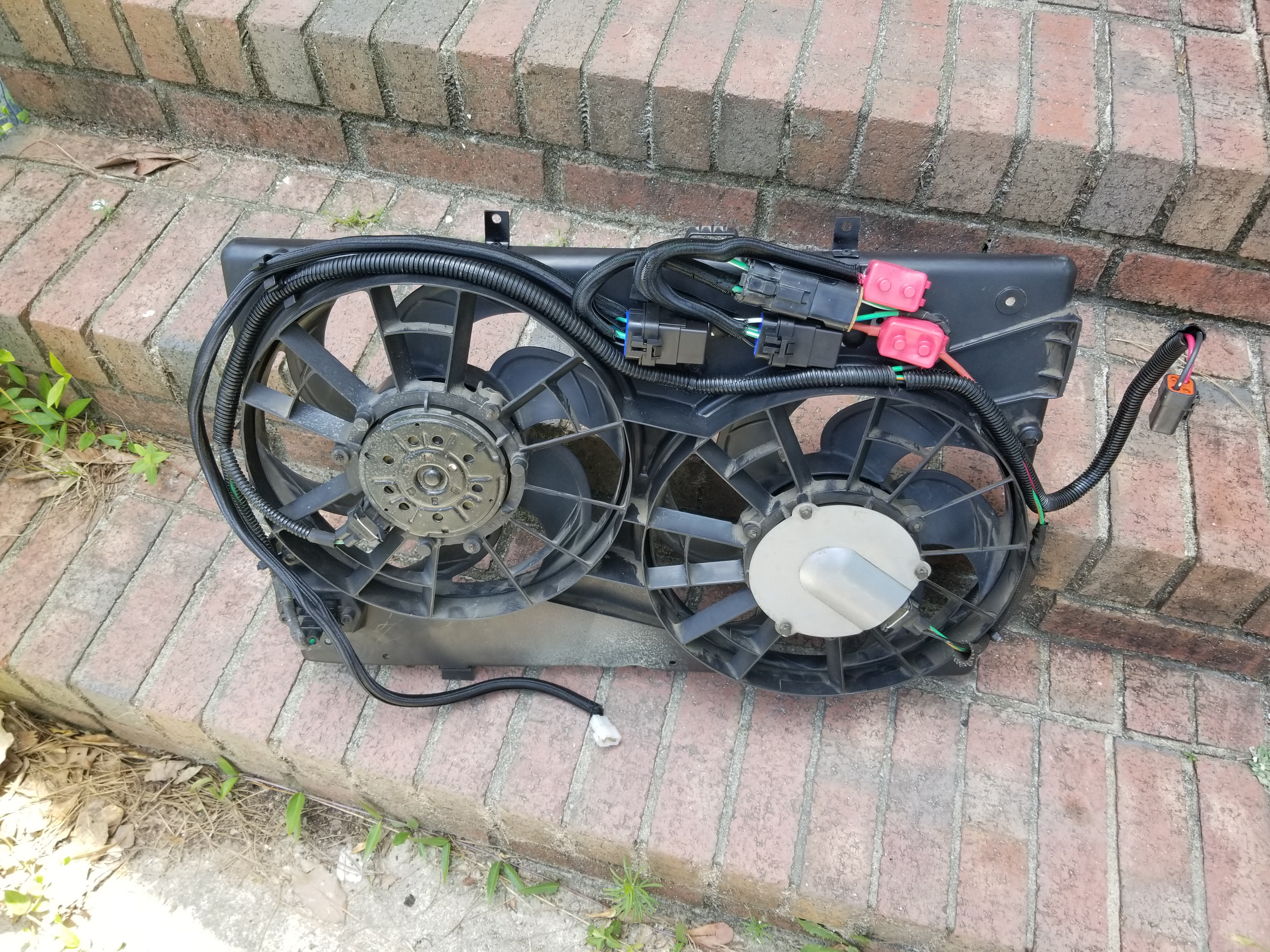 Power and ground are got from the jump post and a ground point near it. Currently using the stock aux fan wiring to trigger the high speed of this fan. A cooler radiator temp switch was installed that triggers on at 87c and off at 75c. May still get a colder one.

I don't have the low speed hooked up yet. I'm planning to use a temp probe near the inlet to the radiator to trigger this vs the output of the radiator where the current temp switch is.


Everything tucks pretty nicely under the stock shroud. From the front you can't really tell anything is different. 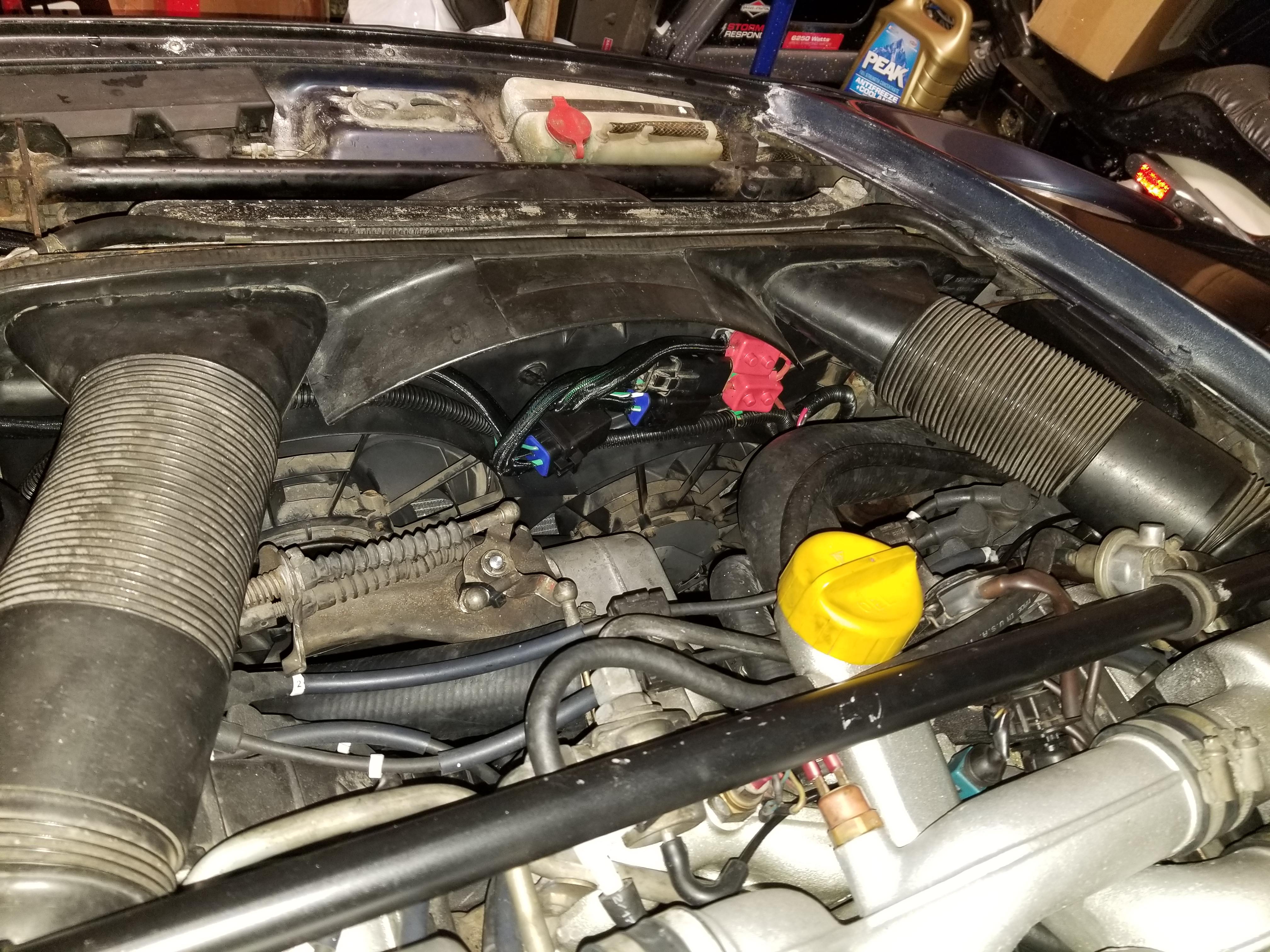 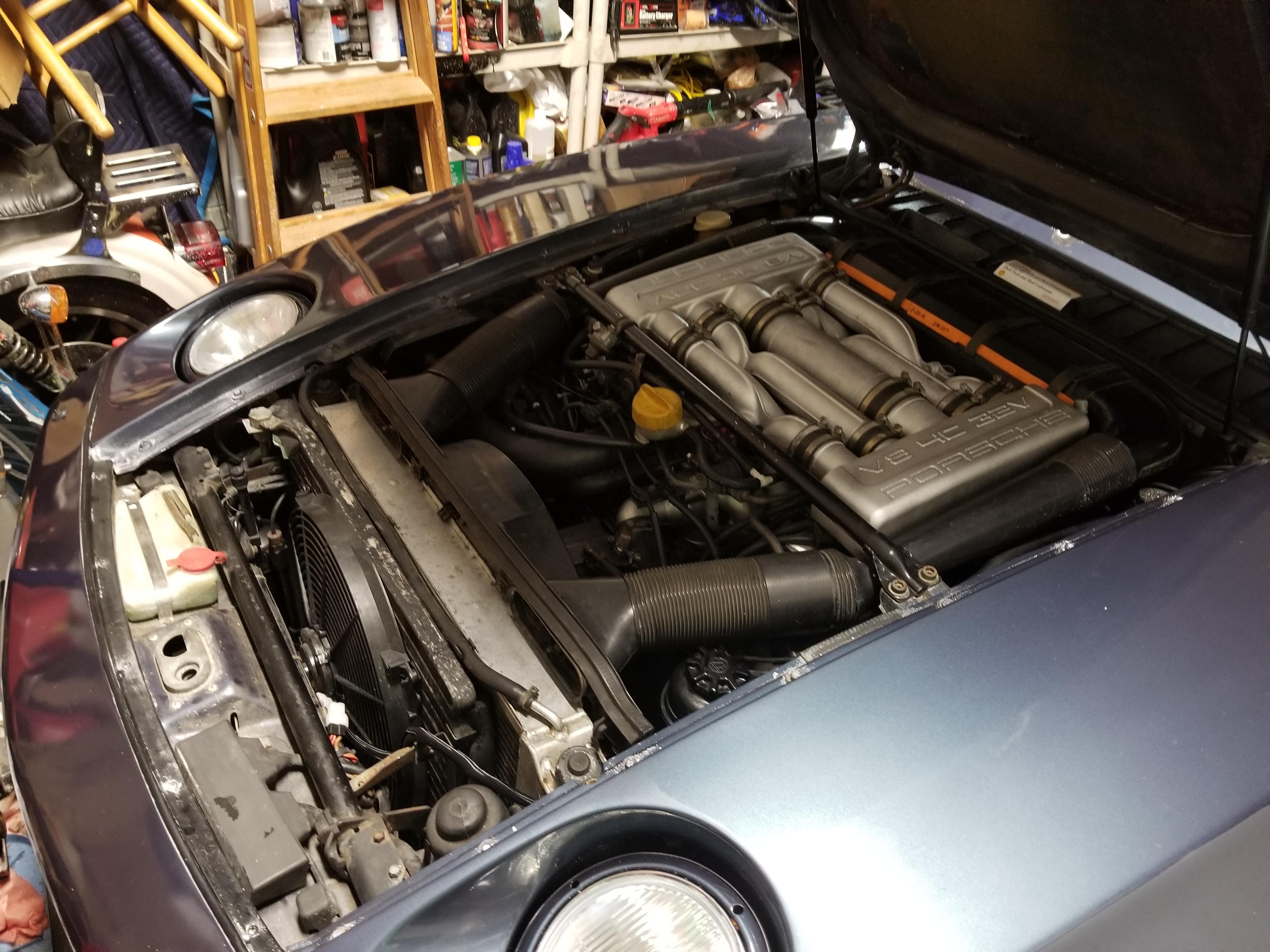 With the fan just running at battery voltage (engine hadn't run in a week) the fan was pulling air at more than twice the speed through the radiator and condenser. That'll definitely help temps when caught in traffic. 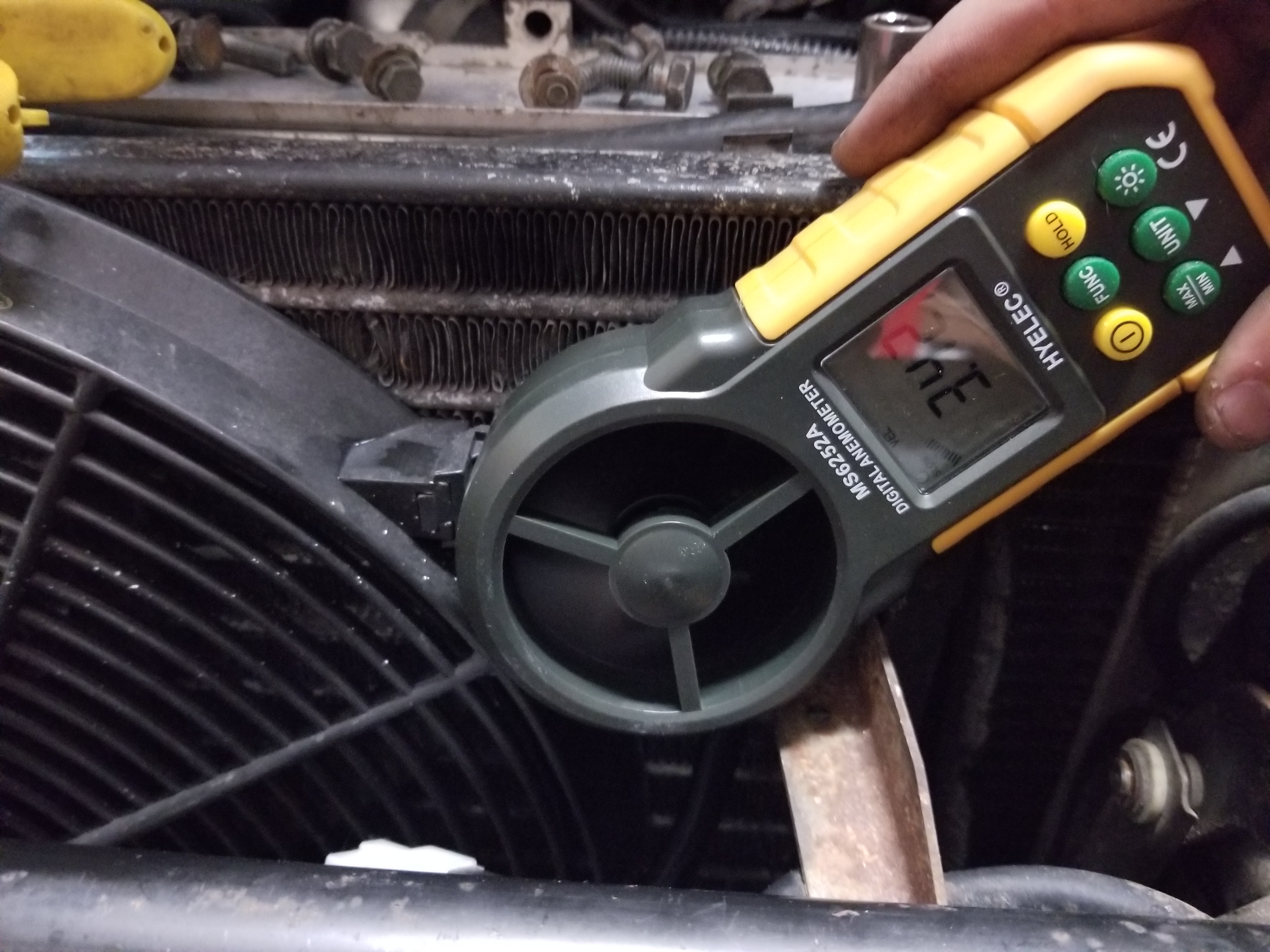 Haven't had a lot of run time yet with this new setup. So far the driving I have done has kept the temps nice and consistently hovering right above the first white mark on the temp gauge. Of course now it's going from being 100 degrees every day to 70s and 80s due to some storms rolling through, but it'll surely be hot again before long to get some more data on how this setup holds up.
-Matt

By captainOCD  -  Wed Aug 04, 2021 7:17 pm
Quote
-  Wed Aug 04, 2021 7:17 pm #95978
Oh and as a bonus, a wj grand cherokee 4L electric fan is just about a perfect fit for the factory fan shroud. It moves a pretty good amount of air too (I'm gonna use it for another project). It isn't going to fit without cutting up the clutch fan bracket though. For earlier cars without the throttle bracket mounted to the fan bracket though it would fit really well. 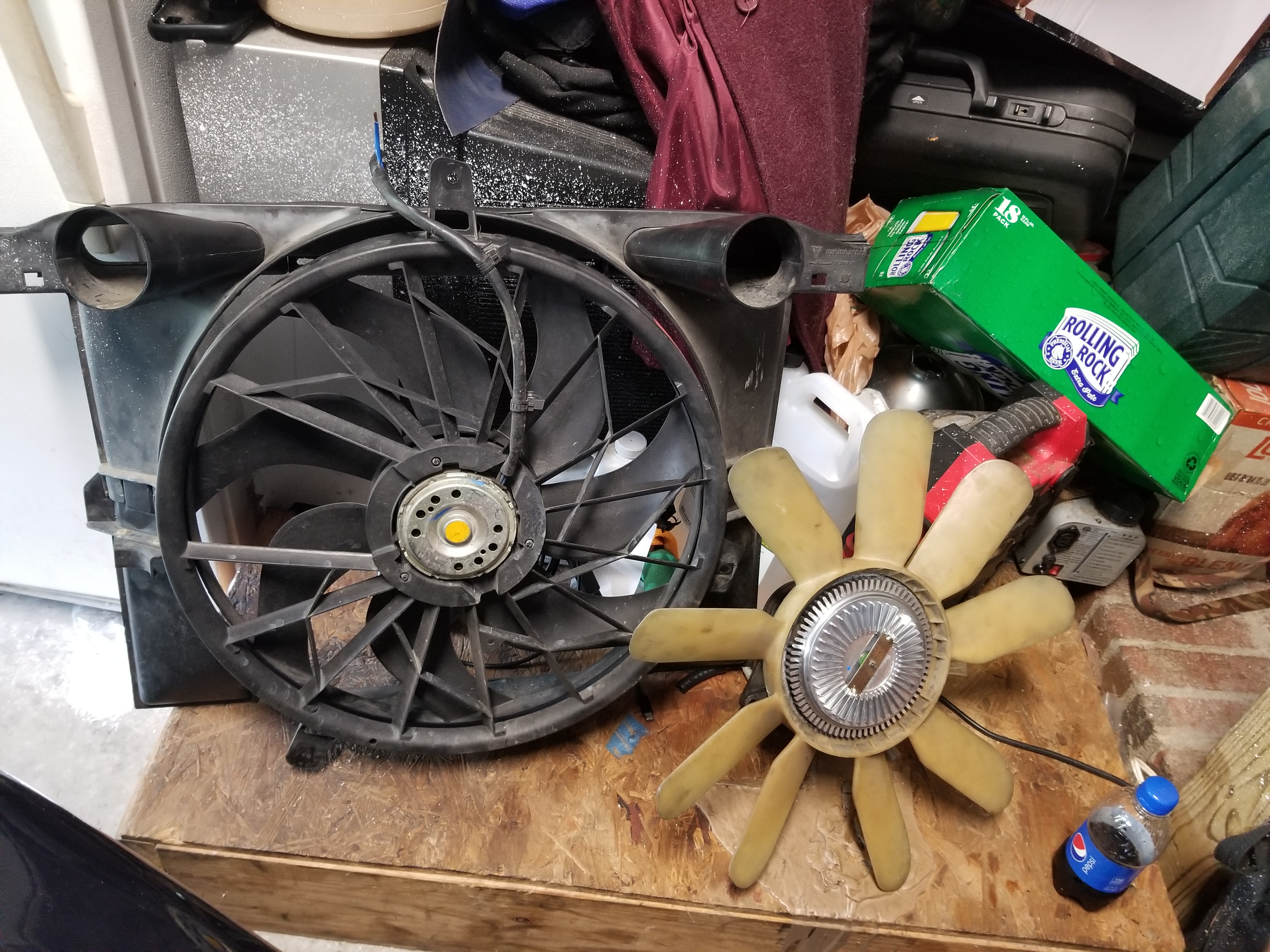 By captainOCD  -  Sat Aug 07, 2021 3:54 pm
Quote
-  Sat Aug 07, 2021 3:54 pm #96578
Went for a ride to get some lunch a little bit ago. Only 88 instead of 100 today, but the electric fans kept everything nice and cool. Even sitting in the freddies drive through for a while then a few redlights the temp never got more than a needle above the lower white line. Water bridge temps sitting around the high 180s with the infrared gun.


Also checked for voltage at the jump post. 13.5v or so at 800rpm idle with fan on high and ac blower running. Turning on everything electric in the car (all the lights, ac blower, radio, rear defroster, etc) resulted in 12.6v. So it seems like the fan is perfectly manageable by the stock alternator.
-Matt

I think its time for that HO alternator..

I measured about 20amps when running the contour fans on high speed from a jump pack. Figure that was at ~12v vs 13-14v with a running engine. So maybe 22-24amps then. Not sure how that compares to s4 fans.
-Matt

The highest I've seen the Temp gauge was a bit over the last white line. I was nervous but didn't change any settings and monitored it to see how high it would get. It never went close to the red line.

Your temp troubles are over with that setup. Cops have this same setup in the Police Special cars back in the day and idled on end with the AC on. Save for taxi's of that same period.
Fred
1989 S4 Koenig widebody, 6 sp-Z06

By captainOCD  -  Thu Aug 12, 2021 7:57 am
Quote
-  Thu Aug 12, 2021 7:57 am #97426
I found that replacing the condenser fan with a higher cfm (allegedly 2000) 16" wasn't enough for me. Maybe 2 smaller ones (although tricky due to the condenser being shorter) could work better. Maybe there's something that could be fitted between the mechanical fan/shroud and radiator that pulls some more through the rad?
-Matt