About that AC blower motor that ate itself.....

First issue was an hour in when the AC died. Blew warm, 96 degrees outside, yuck. Pulled over and rather than pull the climate unit to see what was up with the darn relay I just bypassed the AC compressor at my external relay under the hood (years ago I rewired so the climate relay would only engage a second 20a relay under the hood by the expansion valve and THAT would be the thing to power the AC clutch). Used a 7.5a fuse to do the bypass and AC is working!

However I also bypassed the freeze switch so I had to run the front blower full blast. Worse things happen so off I went in total comfort. Right up to Banner Elk when the blower started to seize up.

Decided not to pull the blower at SITM instead I pulled the AC control unit, popped the top off the relay, cleaned the contacts with 1000 grit sandpaper and sure enough everything is working again. Since the relay is only switching 200ma instead of a very inductive 5a load it should last forever.

However blower was still not happy. So I drove home with the rear AC on full blast and that seemed to do it. Had to turn on the front AC from time to time to keep the front evaporator from freezing up and the fan was very loud and unhappy and only ran at full speed.

Once home I pulled the fan. Doing so isn't bad, as someone mentioned you just take off one side of the roof, hold it CAREFULLY and pull out the unit. Oddly enough the inside bolt was NOT present, weird.

With the fan off I opened the box, took out the fan, and tapped off the fan cage with a drift. I could see the problem, the lower bearing had seized to the shaft and made a mess out of the bearing housing. Ah well, time to fix the motor.

You can take these motors apart. The secret is to use the right size chisel right where the front motor bracket is hooked to the main body. Tap gently and work the sides out of the slots around the peening. Then once off pull the bearing off the darn shaft (another drift against the axle with the bearing supported in a vise) then clean up the armature shaft on the wire wheel. Get it nice and happy and shiny and the bearing will slide on again.

Then it's grease, get the bearing back in the cage, tap down the sides of the cage to hold it again, use a locking pliers to compress the peened sides of the main motor assembly, then tap in the front motor bracket and re-peen the motor sides. It makes sense when you do it.

Fired it up, put fewer washers on the front and got the motor spinning happily with one washer and the circlip. Figured I'd try 2 washers so I popped off the circlip, put it down, put the washers on, couldn't find the circlip. Motor was also jamming in one direction.

Yep, magnets picked up the circlip and sucked it between the magnets and armature. FUCK! Well have to take off the BACK of the motor.

Yep, there was the circlip. Oi.

Anyway with the back off I pulled the armature out of the rear bearing (pull back on the brushes first), greased the rear bearing, then put everything back together. Motor ran at 13.7 volts, 3 amps with no load which isn't bad.

Then I put it together, put the cage fan back on the shaft, put it back into the housing, fired it up, tore up the housing a bit because the fan was too low, pulled it apart, tapped the fan further up, put it together and everything WORKS!

Fan is back in the car but it's dark so I will test it tomorrow. The brushes were about 50% used so I will probably have to replace them in 20 years. Will try to remember that.

Overall the electric motors in these cars are pretty serviceable. Go slowly, never try to force or yank at things, and take your time. I could have bought a $200 used motor on Ebay but it probably would have needed a rebuild as well, and could have had a seized bearing as well....

Picture of the motor apart. 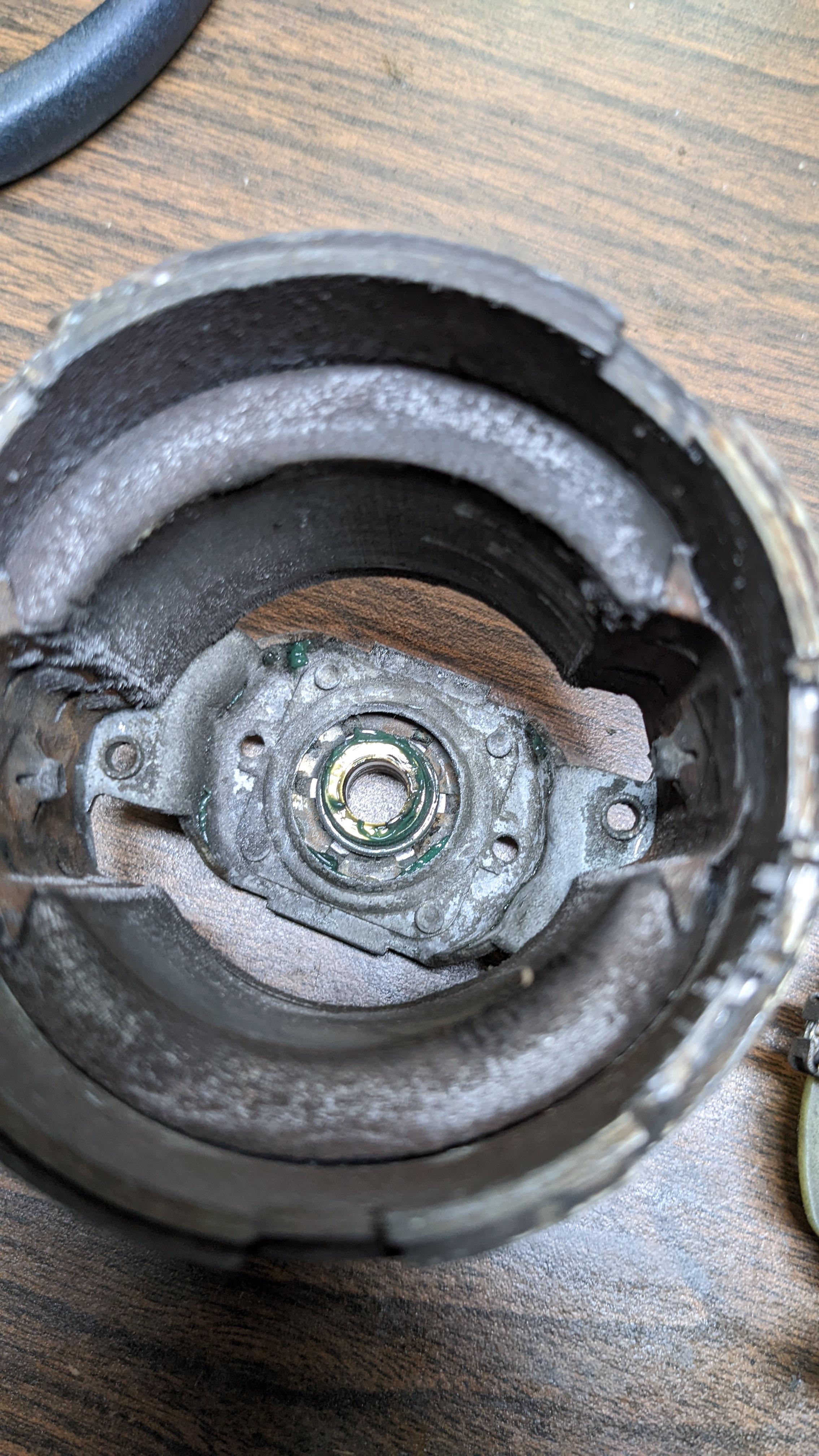 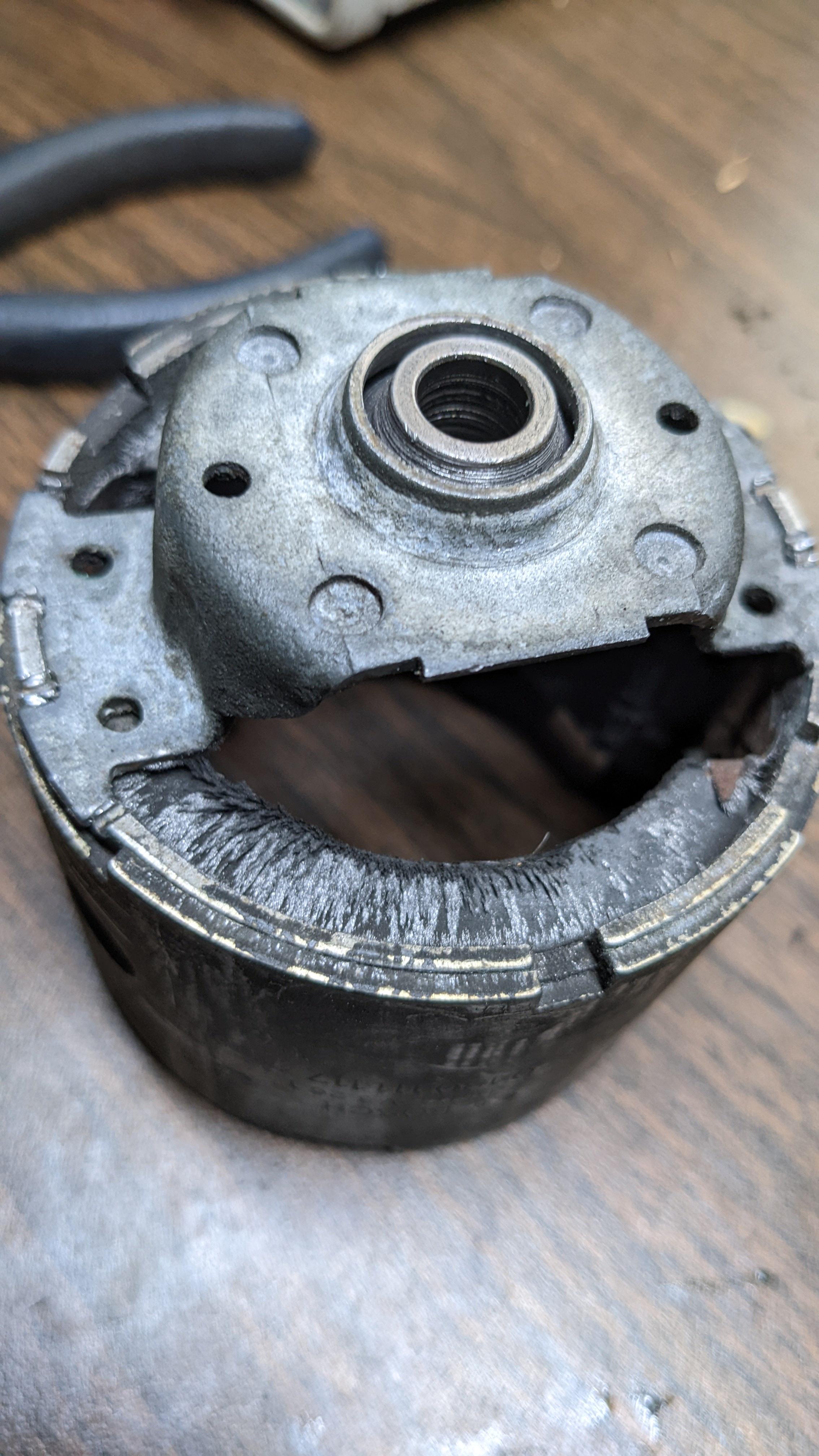 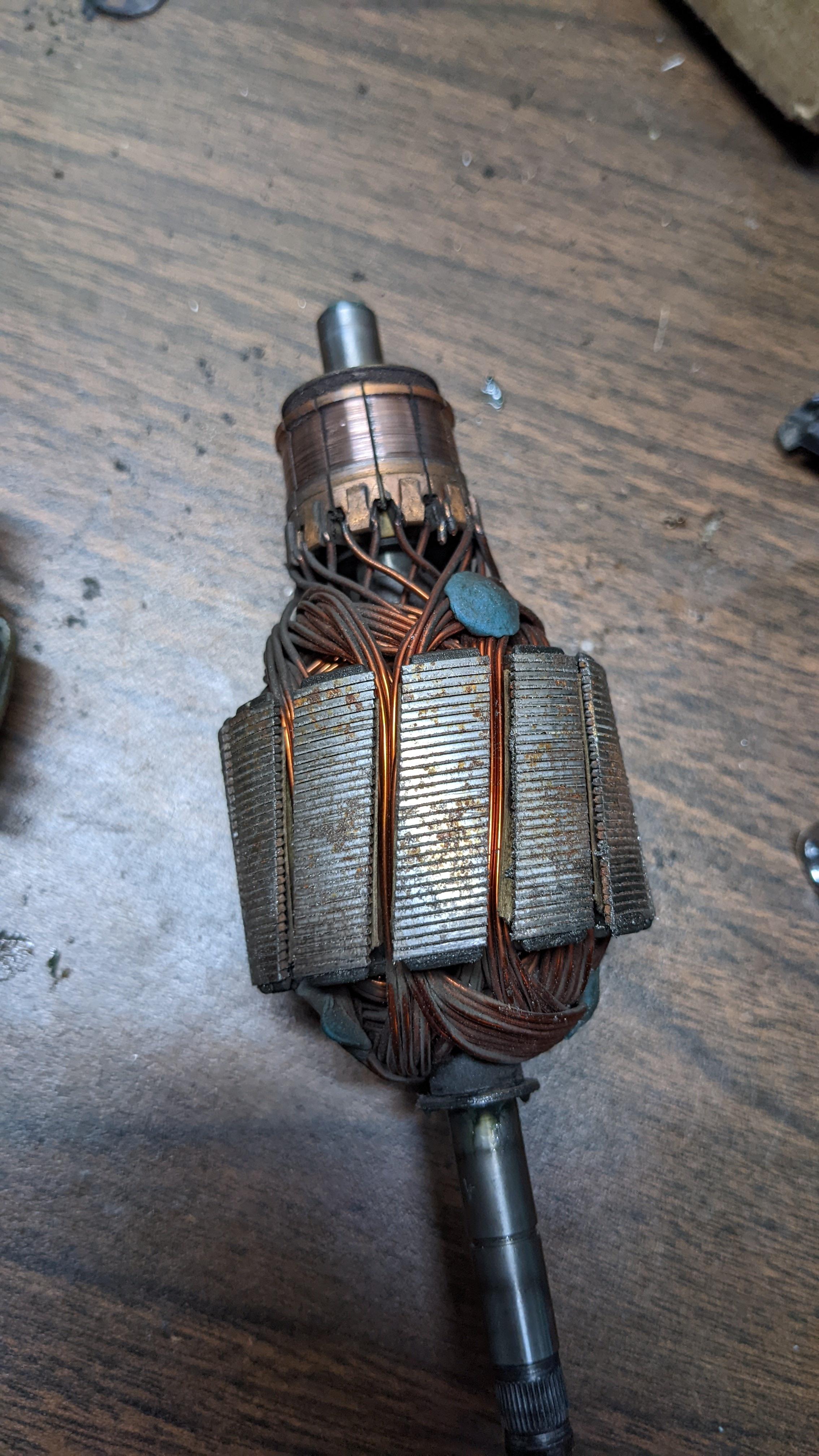 By worf  -  Fri Jun 10, 2022 10:02 am
Quote
-  Fri Jun 10, 2022 10:02 am #154276
Interesting.
Hanlon’s Razor: Never attribute to malice that which is adequately explained by stupidity.
Heinlein’s Corollary: Never underestimate the power of human stupidity.
The Reddit Conjecture: Sufficiently advanced stupidity is indistinguishable from malice.
Worf’s Razor: Never attribute to stupidity that which is adequately explained by laziness.
Worf’s Identity: Sufficiently advanced laziness is indistinguishable from stupidity
Worf's Law: Once you've mitigated risk from stupidity and laziness in your endeavors, failure is usually the result of insufficient imagination.

Bad news: Speeds 1,2,3 do nothing. Which means the resistor pack probably has burned contacts from trying to run a shorted fan at lower speeds where it could not turn. Out comes the fan again to pull the resistor pack....
1986.5 928S Prussian Blue, daily driver
1997 944S Crimson, owned 30+ years now
2000 Honda Insight (the "Not Porsche")

If you have an original fan motor it's pretty simple to disassemble it, clean the armature up, and re-grease the bearings. Almost a PM type of activity and after 30 years they all probably need to be overhauled (like the window motors.)

Proper repair would be to insert a sealed ball bearing in there, that fan on the end puts a lot of stress on the lower bearing assembly. Then again as someone said at SITM: After 30 years greases pretty much become glue regardless.

Meantime swapped out the resistor pack, one of the resistors had opened. Have a spare so not a big issue. Now fan runs properly at every speed even super low... Let's see if the fan pulls 20a then I should be able to calculate the wattage values for replacement resistors.... 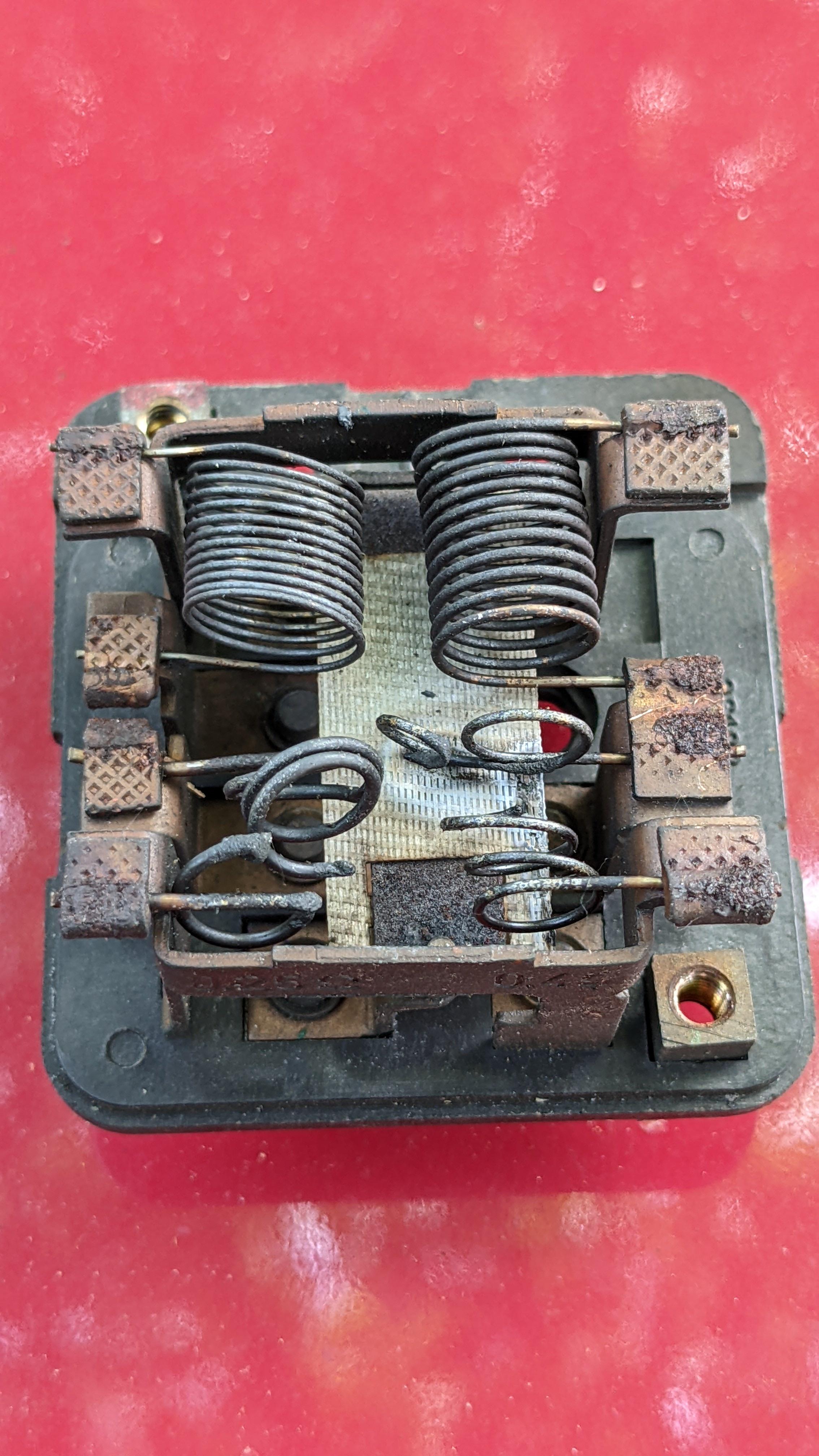