1) Remove the hose that runs from the rear breather port on the passenger/right valve cover.
2) Plug and cap the port on the passenger/right side of the wye in the MAF boot that used to go to the valve cover rear breather port.
3) Insert a plug in the other leg of the wye on the MAF boot that goes to the oil filler neck, then reattach the hose to that leg.
4) Disconnect the hose that connects to the forward breather port on the passenger/right valve cover and insert a plug in that end of the hose.
5) Insert a plug in the hose that connects to the driver/left side of the oil filler neck and reconnect it to the oil filler neck.
6) Run a 1" line from the top of the oil filler cap (drilled and tapped a new aluminum cap to accept 1" NPT) along the passenger/right side of the intake manifold on top of the fuel rail cover.
7) Insert two tee's in the main 1" line that runs along the fuel rail cover. The bottom of those tee's connect to the two breather ports on the passenger/right valve cover.
8) Connect the rear of the 1" line to a Mishimoto high flow baffled oil catch can (https://www.mishimoto.com/universal-hig ... n-kit.html).
9) Connect a drain line from the catch can that terminates under the car at a stainless steel ball valve. It can be tucked up on top of the underbody panel for driving, and pulled out and vertical for draining.
10) Connect the outlet of the catch can to a 1" hose that currently terminates under the car, just behind the back edge of the underbody panel, in a oil breather filter. This will eventually connect to the turbo compressor inlet side once I confirm that no condensate makes it into that line in the winter.

This configuration accomplishes two things other than just isolating the crankcase breathing from the intake pressure. First, it required no permanent modifications to the car. So, I can return the car to stock with no sign of the changes. Second, it did not require the removal of the intake manifold to accomplish. Making installation/removal fast, easy and low risk.

After about 500 miles of tuning, which involved about 40 to 50 pulls to redline in various gears and lots of lower RPM mid to high load driving, I opened up the catch can to see what was in there. It has a very light sheen of oil on everything inside the can, but not really enough to be worth wiping up. The outlet is bone dry. The can is definitely doing its job. But, there is also very little oil making it to the can.

I stuck my finger up the main 1" hose along the fuel rail cover, and I was hard pressed to detect oil in the short distance that I could reach before the first tee. On the filler cap side, there is oil on the inside of the cap, and a small amount of residue in the line leading away from it.

Obviously, there's been no condensate in the drain line so far.

My previous configurations was ejecting a significant amount of oil, so this is a drastic improvement in my eyes. And it means that I can easily make it between oil changes without having to empty the can, let alone having to disassemble it to clean the baffles. And, it means that it is very likely that I will be able to connect the can's outlet to the turbo's compressor inlet to make it a closed system.

To me, it seems like a surprisingly low amount of oil given the driving that I've been doing. But, I'll take it!

I couldn't be happier with the Mishimoto can. It's high quality construction and appears to flow enough for my needs.

Maybe this will give someone else some ideas for their own system, or inspire them to tell me how I'm doing life wrong. :) 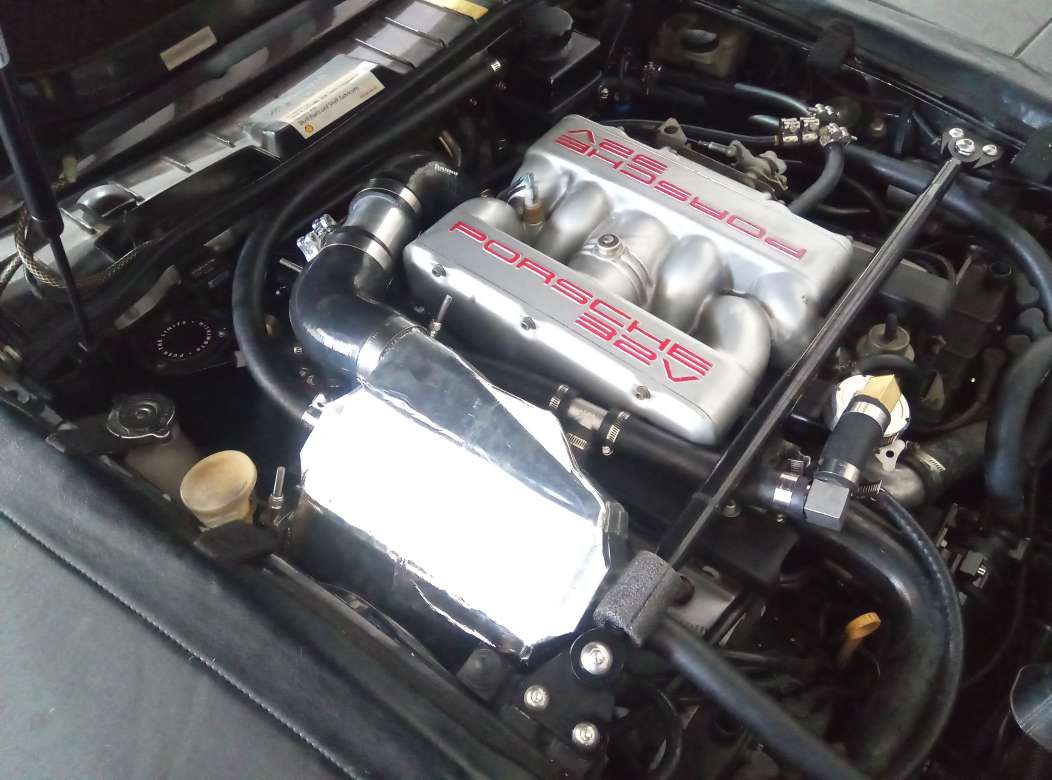 Re: My Oil Breather Configuration (for boosted/turbo motor)#22854

It’s not running yet so I don’t have any data on how well it works. 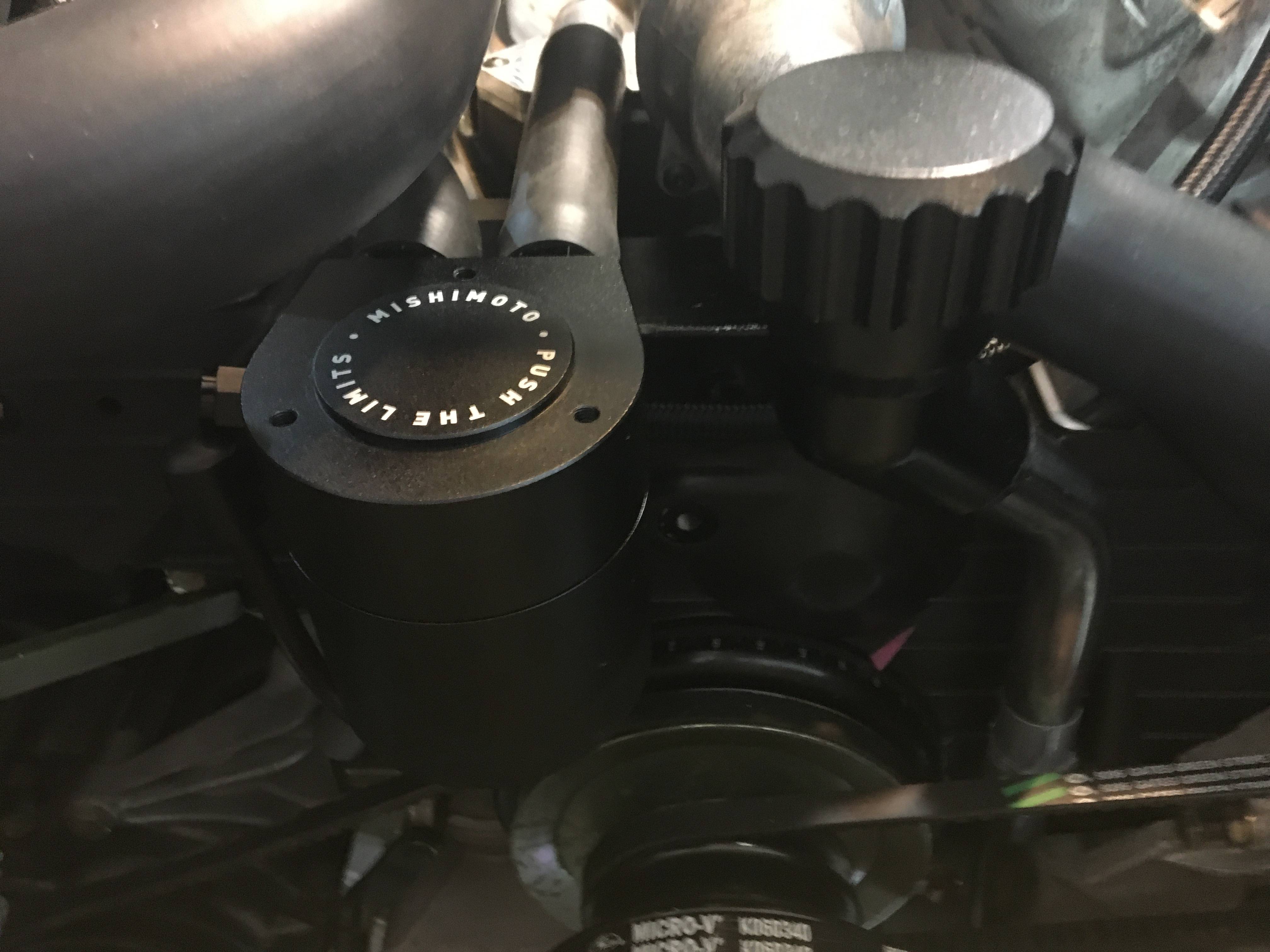 Re: My Oil Breather Configuration (for boosted/turbo motor)#23042

Hopefully, it will work for your installation the way that you want it to. Are you going to run the drain back into the oil sump? I have a feeling that you're going to get more oil than I do, given our different implementations. So far, I've gotten zero oil in my drain line.
Vehicle: 1987 Porsche 928 S4

Re: My Oil Breather Configuration (for boosted/turbo motor)#23116

Shifted wrote: ↑Sun Oct 04, 2020 8:21 am It's a shame that the oil separator hides the mounting bracket, because you did a phenomenal job with the bracket.

Hopefully, it will work for your installation the way that you want it to. Are you going to run the drain back into the oil sump? I have a feeling that you're going to get more oil than I do, given our different implementations. So far, I've gotten zero oil in my drain line.

Thanks. I wanted to mimic the lift bracket with a few small changes and thicker steel. I'll have it coated after I get it running, and will probably weld on a ring similar to the original bracket, my attachment point goes right under the radiator hose so it blends in fairly nice.

I'm also going to run a drain from the bottom of the separator to my oil fill tube on the right.

When the time comes, can you do simple play by p[…]

For those with aftermarket adjustable drop links, […]