Why would you leave a water bridge bolt three turns from tight?

Anyways, at least we solved the mystery of the gasoline leaks when tank is full.

Gasoline leaking from stereo is all too common.

As I wrote in the previous:

I've no doubt that Sean and I could post once per day each on the "head scratching" stuff we've found over the years and not run out of material for a long time.

Last century when I didn't know that my 'retirement job' was going to be restoring 928s, when my actual job was running a startup/growing software business, but people were still dragging 928s to me on flat beds from other shops, I spent time trying to figure out "why did the last guy to this? What did he know that I don't? What was going though his mind when he did this?"

After 10 years, I decided that there was no point do that. I came to the conclusion that, outside of road-side emergency repairs, not doing it 'like the factory' better have damn good reasons that weren't hard to figure out, either through logic and engineering knowledge, or by making a call to folks like Earl, Stan, Greg, etc. Furthermore, I simply came to the conclusion that a majority of folks that wrench on cars for a living simply don't GAF and their primary purpose is to get the car out and assume that they will never, ever see it again.

I think you took what I wrote and ran off on a direction I hadn't intended. I even edit the post to attempt to clarify that I wasn't recommending a thread for just your 928's PO's 'tricks' nor just the stupid crap I've found.

I thought it would be a good idea to have a "Stupid PO tricks"thread in which we could all throw our anecdotes.

To that end may I suggest that you edit the thread title so that it's not all about me? :)
Hanlon’s Razor: Never attribute to malice that which is adequately explained by stupidity.
Heinlein’s Corollary: Never underestimate the power of human stupidity.
Worf’s Razor: Never attribute to stupidity that which is adequately explained by laziness.

yeah so what in the hell happened there???

By SeanR  -  Sat Aug 29, 2020 9:02 am
Quote
-  Sat Aug 29, 2020 9:02 am #13034
Roger was joking with him about aftermarket parts, some guy posted a funny pic asking if he should start a thread about tensioners and torque tube bearings and Greg lost his shit. Decided to no longer help on rennlist and all his parts would only be sold through his shop and accused Roger of not paying his bills to him. Which was total bullshit. So Rog just said ok, he'd return all the parts he has in stock and wants a refund. Rog now has to refund several thousand in orders for parts that have been on back order and now I've been tasked with coming up with a fuel line product line.

yeah so what in the hell happened there???

SeanR wrote: ↑Sat Aug 29, 2020 9:02 am Rog now has to refund several thousand in orders for parts that have been on back order and now I've been tasked with coming up with a fuel line product line.

That was a bad move on Greg’s part.

i'm not surprised honestly. i 've been expecting something like this for a bit now. it's unfortunate for sure.

Genuine Porsche baffle was in fact installed, I know its a genuine part because the installer did not remove the Porsche part number label which, of course, ended up just below the oil pump pickup screen. Notice how the label has taken on the profile of the pickup while causing approx. 60% blockage... Always had normal oil pressure though.

The sheared off screw was an added bonus, none of the holes had been tapped deep enough. Nobody will ever see it, right? 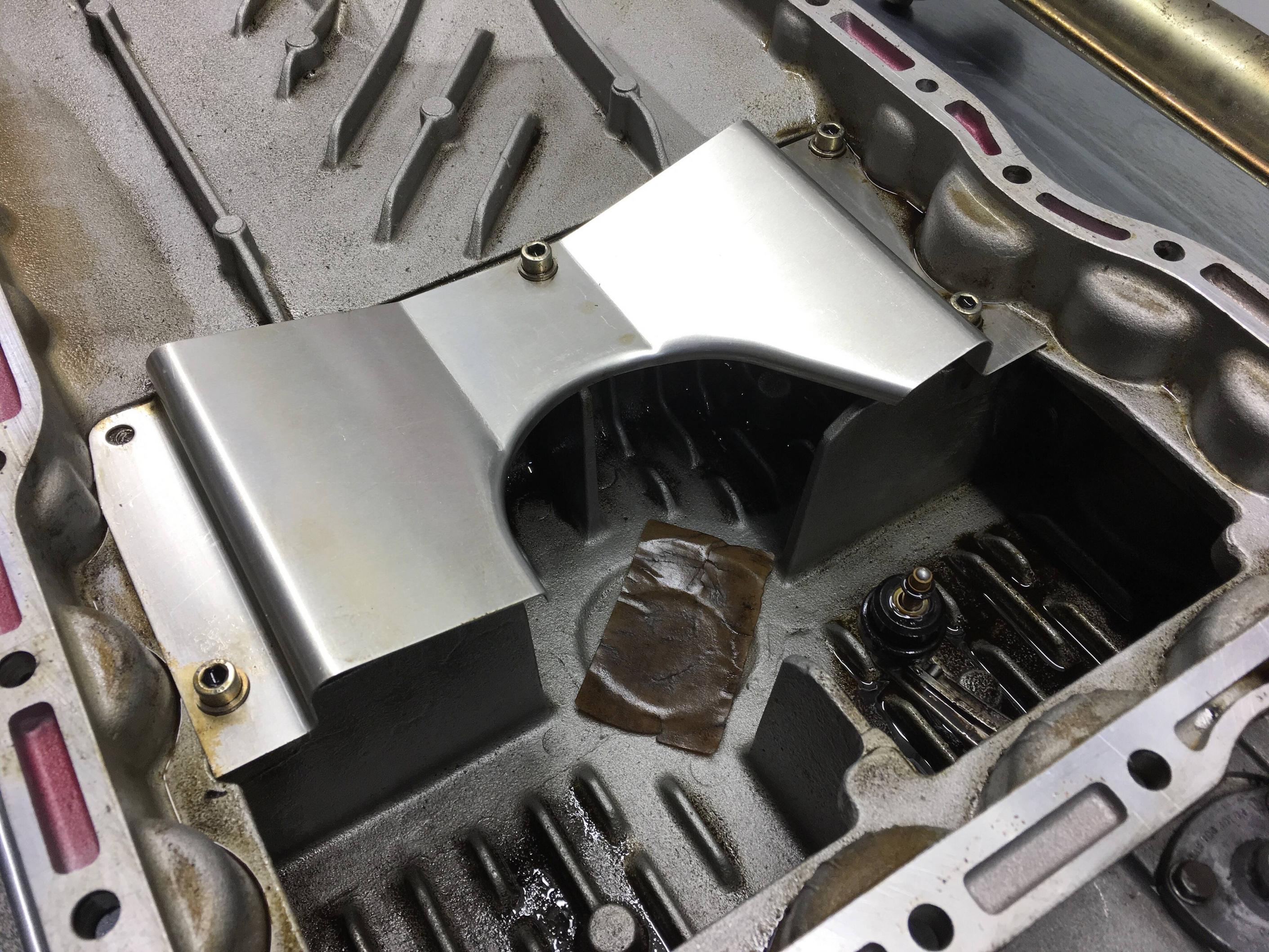 Makes perfect sense if you look at my signature. It's way too much work to measure, drill, and use both a starting tap and bottom tap. <roll eyes>

I've decided that that is the 'justification' for a lot of work I see on 928s. As in: fuck it. *I'll* never see this 928 again and if anything happens because I'm too lazy to do it right, I'll just lie, dissemble, or shift blame."

Whereas I assume that every 928 I touch will come back to me and I'll have to warranty any mistakes or past laziness.
Hanlon’s Razor: Never attribute to malice that which is adequately explained by stupidity.
Heinlein’s Corollary: Never underestimate the power of human stupidity.
Worf’s Razor: Never attribute to stupidity that which is adequately explained by laziness.

Shifted wrote: ↑Sun Aug 30, 2020 6:03 pm Thanks. Now I don't feel nearly as bad about the crazy stuff that I find on mine! Fuels into the gas tank? Stickers and sheared screws in the crankcase? Sheesh.

One of the GTs I have here is really irksome. 1/4 the stuff I’ve taken apart can’t go back together without a TimeSert or a thread cleaning tap. I had to throw away all 26 cam cover bolts. 1/4 of the stuff was hand tight when I got to it. It’s like someone turned loose a stoned monkey with an air ratchet set to 15 nm; enough to screw up 6mm bolt holes but not enough to tighten an 8mm bolt.
Hanlon’s Razor: Never attribute to malice that which is adequately explained by stupidity.
Heinlein’s Corollary: Never underestimate the power of human stupidity.
Worf’s Razor: Never attribute to stupidity that which is adequately explained by laziness.

When the time comes, can you do simple play by p[…]

For those with aftermarket adjustable drop links, […]