Subjectively, the car drives much better. The power feels like it comes on much faster when you start from fully off the throttle. It also feels like there is more power available lower in the rpm range. The car definitely drives smoother. The power feels less "ON" and more "here it comes", but sooner. It's hard to describe, but it's more predictable and gives you more indication of what's coming. I also noticed that when I did my pulls, the boost gauge flashed at me a few times, indicating that I was approaching 12psi. I have the wastegate set to 11.6 and I've never had the gauge flash at me on any previous runs. Which tells me that the turbo is having an easier time delivering air than it has in the past. It definitely builds boost faster than before.

Seat of the pants is important for driving enjoyment. But numbers are where you can see why it feels different. I did some pulls in the same places that I do all of my testing, and got some good comparative data.

One thing I found is that the AFR's dropped a lot. As much as 1.3 lower at 6,200 RPM. If anything, I was expecting AFR's to go UP a little bit with more air being delivered sooner. Plus, it's about 20 degrees cooler today than it was for my last test, so that should have driven the AFR's up a little bit too. What I think is happening is that the fuel pressure regulator is increasing the fuel pressure with the turbo delivering more air. It's doing that because it is seeing pressure on the port where it normally sees vacuum. Higher fuel pressure means more fuel for each fuel injector opening, so it's making the AFR richer. That's my hypothesis. I've made fuel map adjustments and will do some more pulls to get that dialed in again.

But, the main thing that I noticed is that the power and torque are coming in earlier than they used to. The torque is reading significantly higher than before. I would chalk that up to variances in an uncontrolled environment, except that the horsepower numbers were almost identical to my previous runs. So, maybe it's making more torque? Regardless, the power and torque are definitely coming on sooner. Every run that I did showed the same result, which corroborates how it feels.

Anyway, here is a photo and a before and after graph. Don't mind that dip at 5,300 RPM. Sometimes I get peaks and valleys like that from the SharkTuner. I think that it has trouble keeping up sometimes. The car didn't suddenly and momentarily lose 60 hp :) 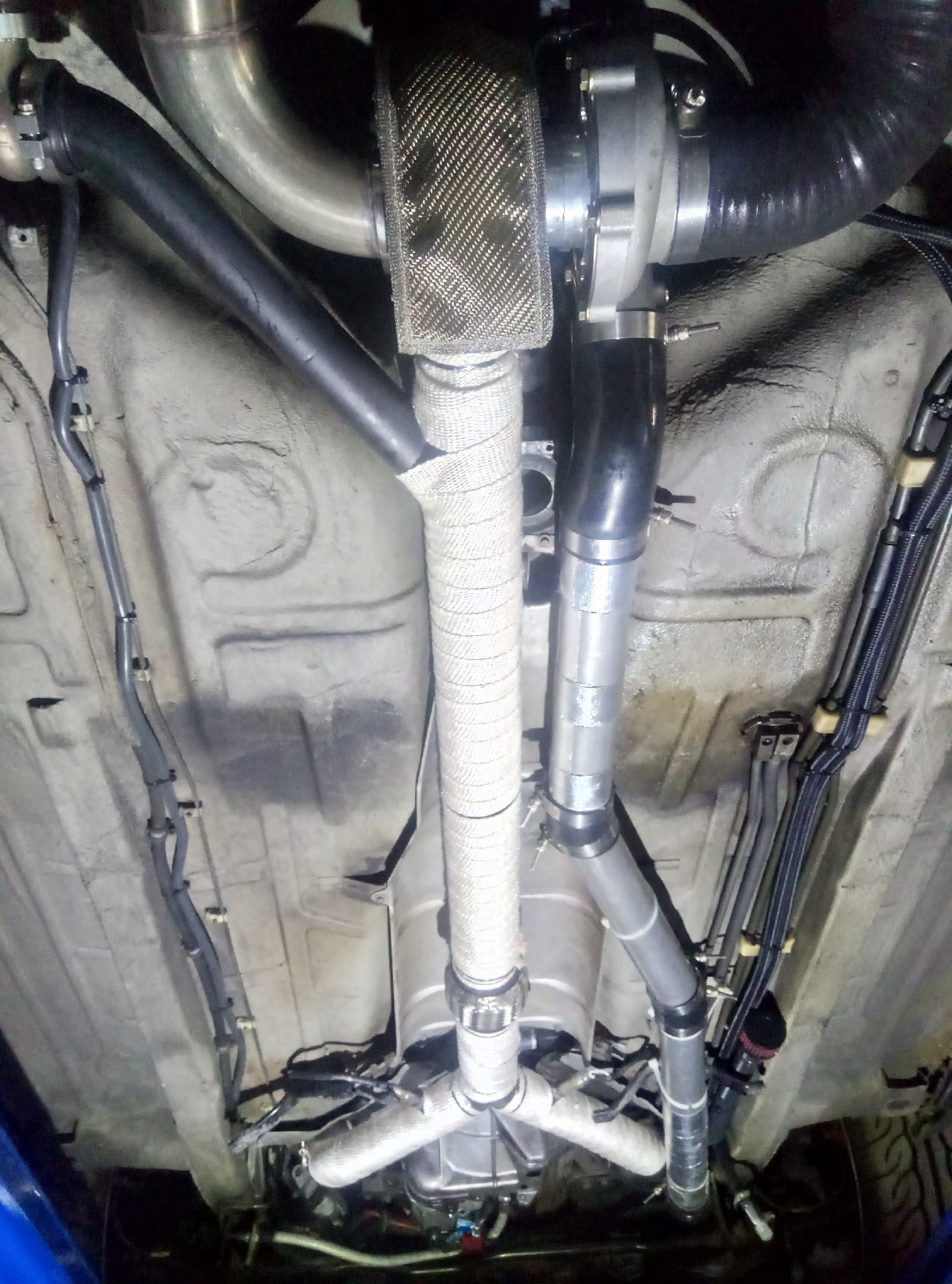 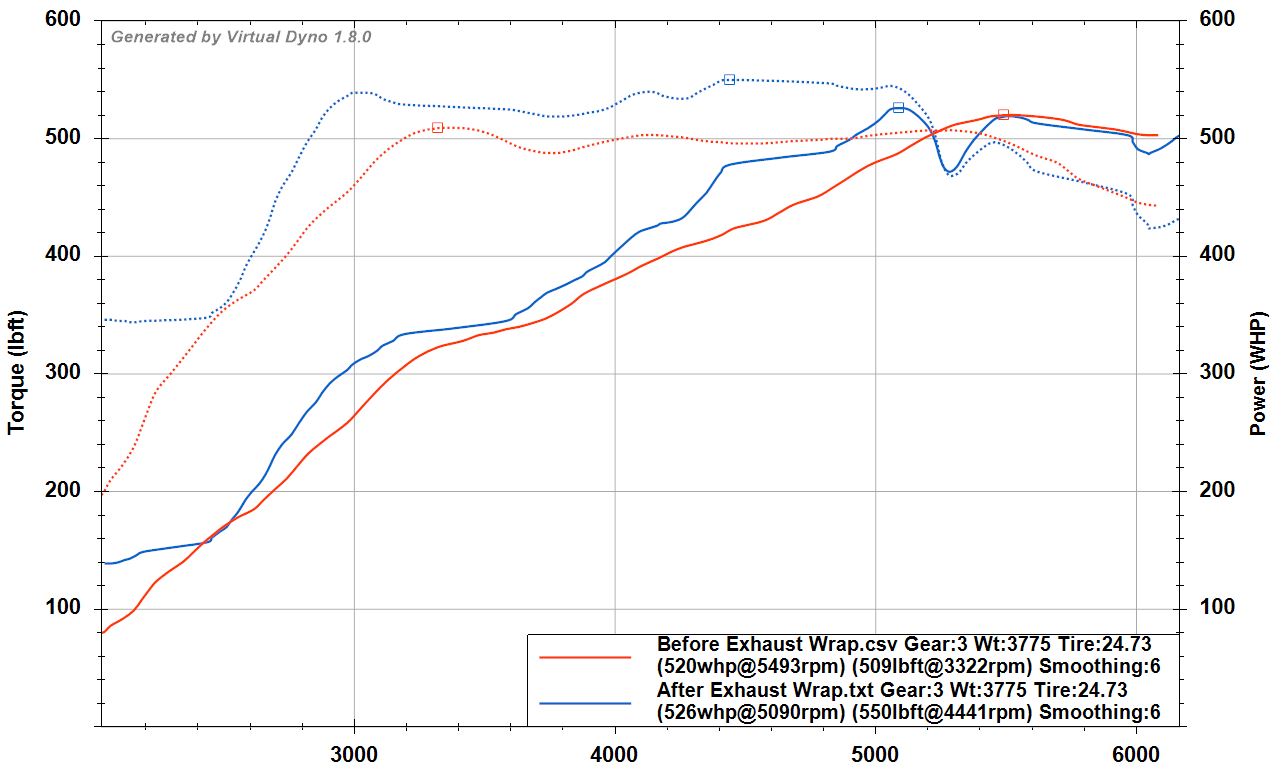 Re: Effect of exhaust pipe wrap and turbo blanket on mid-mount turbo#18164

The wrap really does change how it feels. If anyone ever does a mid or rear mount turbo, give serious consideration to wrapping the exhaust and adding a turbo blanket from the beginning. Before you do your tuning.
Vehicle: 1987 Porsche 928 S4

Re: Effect of exhaust pipe wrap and turbo blanket on mid-mount turbo#18250

When you say pulls, is that a dyno, or a set of electronic traces made during blast offs, or something else?

Re: Effect of exhaust pipe wrap and turbo blanket on mid-mount turbo#18284

By Shifted  -  Tue Sep 15, 2020 6:36 am
Quote
-  Tue Sep 15, 2020 6:36 am #18284
I'm more disappointed than surprised. The car drove great without the wrap and was very responsive. Boost seemed to come on quickly and I had zero complaints. I had been advised by others with more experience that there is very little heat loss between the motor and the turbo, so wrapping the exhaust, let alone a ceramic coating, was completely unnecessary. But, I'm a physics major (a LONG time ago and not my career), and I think about things a lot. And do a lot of math for fun. And I couldn't stop thinking that there had to be significant heat loss. It's a long stretch of pipe that is completely exposed to the air stream under the car.

The pipes are ceramic coated, but that can only do so much. Nothing can beat true insulation. I figured for a few hundred bucks, it was worth trying. The effect of the wrap makes total sense. And it's not only subjectively felt, but quantitatively verifiable. I'm just disappointed that I didn't do it from the start.

Anyway, when I say "pull" or "run", what I'm referring to is doing wide open throttle (WOT, pedal to the floor) acceleration to red line. I try to start around 1,500 RPM, but sometimes am forced to start at 2k or a little above. I do this in 2nd or 3rd gear, and always in the exact same spots with engine temperatures at the same level so that comparative data is relevant. I do have data from other locations, but that's only useful for tuning, not comparisons. I record data using the SharkTuner. The data that is the most useful is:

I also collect coolant temperature, O2 sensor adjustment, and ignition advance for my own interest and help in tuning.


Another interesting observation is that the runs that I make in 2nd gear are a bit leaner than the ones that I make in 3rd. I like having AFR data from both gears so I can adjust my fuel to allow for a safe margin in all scenarios. I wish that I could do the same in 4th, but I don't feel comfortable doing that on the road. A dyno would be useful, but that's not an option for me right now.

I do a lot of other driving in lots of scenarios to get data in other load ranges and conditions. I'll also do a few pulls back to back to see how coolant temperatures are affected and how the AFR's are affected when the intercooler warms up. But, that data is really just useful for fine tuning and doesn't demonstrate as readily the differences in modifications.
Vehicle: 1987 Porsche 928 S4

Re: Effect of exhaust pipe wrap and turbo blanket on mid-mount turbo#35418

Does that well along with a lot of other uses. It&[…]